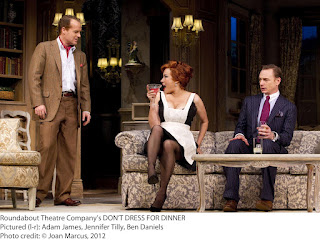 Traditionally, farce has tended to fizzle on Broadway, very unlike the rest of the world. In London’s West End especially, it has always thrived. Marc Camoletti’s “Boeing Boeing,” a smash hit in London in Matthew Warchus’ side-splitting revival managed a big splash here, if not a hugely long run, thanks to its razor sharp direction and the terrific performances, especially that of Mark Rylance.

So now we have Camoletti’s other major hit, "Pajamas Pour Six," which ran for a whopping six years in London in its adaptation by Robin Hawdon as “Don’t Dress for Dinner.”

At the Roundabout, under the accomplished direction of John Tillinger, it generates plenty of laughs. The play is deftly constructed and the cast has the style down pat, even if falling short of the brilliance of that “Boeing Boeing” production.

The story takes place in 1960 outside Paris where a British philandering husband Bernard (Adam James) plans to take advantage of his wife Jacqueline’s (Patricia Kalember) visit to her mother by having a liaison with his mistress, Suzanne (a hilariously lowdown Jennifer Tilly). His old friend Robert (Ben Daniels) will come to stay as well, to throw Jacqueline off the scent. She’ll think Bernard’s having a guys-only weekend. But just before leaving for her mother’s, Jacqueline learns of Robert’s imminent arrival. It seems she and Robert are having an affair of their own, and as she can’t pass up a chance to have him under the same roof, she cancels her trip, much to Bernard’s intense disappointment.

Bernard quickly concocts a scheme. Suzanne will pretend to be Robert’s mistress for the duration. Robert is reluctant to go along with it, but Bernard prevails. And when an unflappable cook Suzette (Spencer Kayden) shows up, Robert assumes it’s Bernard’s mistress, and proceeds according to plan. When the actual Suzanne arrives, she must pretend to be the cook, thereby perpetrating a dizzying succession of falsehoods and assumed identities.

Kayden (“Little Sally” in “Urinetown”) is especially droll, while Ben Daniels returns to the Roundabout after his very serious role in “Les Liaisons Dangereuses” – the title of which comes up a couple of times here – and it’s fun to see him show his comic side. David Aron Damane does good work as a late arriving character near the end.

John Lee Beatty's set makes the perfect backdrop for all the mayhem. And William Ivey Long’s costumes expertly define the characters, and the cook’s outfit he’s concocted for Suzette allows for one of the most hilarious and speedy costume changes ever.