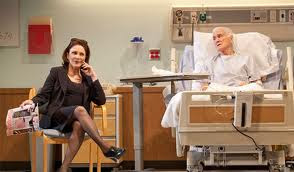 Linda Lavin, as you’ve undoubtedly heard, is giving one of her peerless performances in Nicky Silver’s “The Lyons” which has transferred to Broadway’s Cort from the Vineyard Theatre. I feel I’m one of the few who missed it there, but approaching it fresh in its uptown venue, the play seems right at home.

As Rita, a sardonically biting, irreverent, wife to dying Ben (Dick Latessa) whom she has stopped loving decades ago, and mother to two extremely dysfunctional grown children: gay Curtis (Mike Esper), an unsuccessful writer of short stories, and bitter Lisa (Kate Jennings Grant), a recovering alcoholic, Lavin gets plenty of laughs but also conveys the scarring that led to her shockingly glib flippancy at her husband’s deathbed.

The first and last scenes are set in that hospital room, overseen by a no-nonsense nurse (Brenda Pressley).

The second act opens on a scene of Curtis checking out an apartment with a real estate agent (Gregory Wooddell). But there’s more here than meets the eye, for it’s an increasingly tense cat-and-mouse scene that starts you wondering what is has to do with what has transpired in the first act. But there is a payoff, and leads to the final scene back in the hospital room.

Underneath playwright Nicky Silver’s scathingly funny barbs – these family members really know how to hurt each other – is a bittersweet portrait of a lifetime of loneliness, miscommunication, and disconnection.

And though you may not think it’s possible, by the end of the evening, you do feel empathy for them, even the seemingly heartless Rita.

Mark Brokaw’s direction expertly brings out the poignancy amidst the laughs. And Latessa, Esper, Grant, and Pressley give finely gauged performances.

Allen Moyer’s hospital room set is just like the real thing, and the apartment setting a benignly white shell for the surprisingly aggressive events that ultimately transpire there.