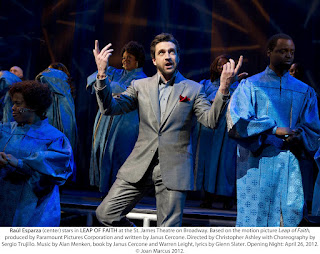 Advance word on this show was decidedly mixed, but I found it to be most enjoyable.

The musical is based (with some significant plot alterations) on the 1992 Steve Martin movie about a bogus faith healer who, in this version, sets up his tent in drought-laden Sweetwater, Kansas and locks horns (and falls in love) with a skeptical widowed sheriff with a 13-year-old wheelchair-bound son who believes the preacher can make him walk again.

The show is solidly constructed with a score that ranks with Alan Menken’s best. He did well with the gospel-flavored “Sister Act” last season, and thematically this show gives him further opportunities for some roof-raising anthems.

But it is those quieter numbers which arise conversationally from the dialogue (book by screenplay writer Janus Cercone together with Warren Leight) that gives the score its quality. All the songs actually drive the story and are not just shoehorned in for their own sake. And in this day of excruciatingly loud shows (e.g. “Ghost,” and Menken’s own “Newsies”), it is a pleasure to encounter a sensible sound design (John Shivers) that doesn’t hit you over the head with volume.

Predictably, Raul Esparza is dynamic as con artist Jonas Nightingale, singing strongly, and playing the character’s eventual conflict with conscience very well indeed. Jessica Phillips is also outstanding as Marla McGowan, the sheriff. She’s tough and real, and her scenes and songs (“I Can Read You”) with Esparza have a genuine tension. Talon Ackerman makes her son Jake appropriately sympathetic without being sappy.

Fans of “Smash” will enjoy seeing the excellent Leslie Odom, Jr. – who plays Christian Borle’s new boyfriend – as genuine preacher Isaiah who feels compelled to expose Jonas. There’s superlative work, too, from Kecia Lewis Evans as his mother Ida Mae and Krystal Joy Brown as sister Ornella, both loyal members of Jonas’ troupe who believe that whether Jonas is a con or not, he’ll always “come through.”

Rounding out the talented leads is Kendra Kassebaum is Jonas’ hard-nosed but loving sister Sam.

Sergio Trujillo’s choreography – mostly movement for the choir – fills the St. James stage satisfyingly against Robin Wagner’s lofty tent setting. Christopher Ashley directs with a fine feel for the drama of the piece.

This amalgam of “Elmer Gantry,” “The Music Man,” and “The Rainmaker” – despite clichés and predictability – touches the heart.