Nice Work If You Can Get It (Imperial Theatre) 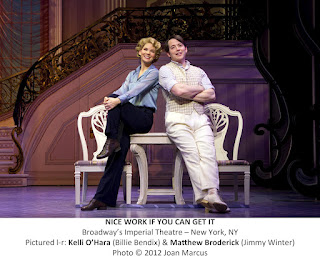 With “Porgy and Bess” still going strong, theatergoers now get a chance to remember the lighter side of The Gershwins with the delightful “Nice Work If You Can Get It” which, like the last Gershwin pastiche, “Crazy for You,” mines brothers George and Ira’ songbook to create a “new” musical.

“Crazy for You” had a funny book by Ken Ludwig, and this new one by Joe DiPietro also scores high on the laugh meter. Frequent Gershwin collaborators Guy Bolton and P.G. Wodehouse are credited with inspiring the material, and indeed, the plot line and several of the character names are lifted directly from their “Oh, Kay!” But there are major plot divergences, and thus “Nice Work” bears about as much resemblance to “Oh, Kay!” as “Crazy for You” did to “Girl Crazy, which is to say, not very much.

Matthew Broderick and Kelli O’Hara have charm in abundance as womanizing rich guy Jimmy and tough-talking bootlegger Billie Bendix, whom Jimmy calls Gertie, apparently in homage to original “Oh, Kay” star Gertrude Lawrence. They meet after Jimmy gets loaded during a final bachelor blow-out the night before his wedding to the daughter Eileen (Jennifer Laura Thompson) of an upright senator (Terry Beaver).

Before long, a la “Oh, Kay,” the bootleggers are using Jimmy’s Long Island beach house to store their goods, and Billie must impersonate first Jimmy’s new bride, then a Cockney maid.

Only two “Oh, Kay” songs are used, and despite claims of some rarities, the rest is mostly familiar material. But in new and clever contexts, and sparkling orchestrations (by Bill Elliott), everything registers as freshly minted.

Broderick is a bit long in the tooth (and full in the tummy) at this point, but he still plays boyish innocence better than anybody and he’s funny and appealing. He sings beautifully and authentically, including a first-rate “Do Do Do” accompanying himself on the ukulele with a harmonizing trio.

Kelli O’Hara demonstrates that the comic chops she revealed in Encores’ “Bells Are Ringing” were not a fluke. She’s a delight as the low-born bootlegger, and later as the maid. She lets down her hair hilariously in her over-the-top sexy vamp, “Treat Me Rough” and does what used to be called an “eccentric dance” to “Hangin’ Around With You” while ladling out soup in a dinner scene. And throughout, she sings like a dream. Together, she and Broderick make a surprisingly appealing team.

The supporting cast is marvelous. Judy Kaye as Eileen‘s stern prohibitionist aunt, and Michael McGrath as bootlegger Cookie McGee posing as a butler are pros, and Kaye’s antics during the dinner scene are a stitch. Their challenge duet of “By Strauss” (her), and “Sweet and Lowdown” (him) is another highlight. Third couple Robyn Hurder and Chris Sullivan, a typical dumb blonde and sweet lug, provide additional diversion. An authoritative Estelle Parsons dominates the final scenes, looking terrific and providing a neat tie-up to the action.

Technical credits are fine across the board. including Derek McLane’s pretty settings, Martin Pakledinaz’s fetching costumes, and Peter Kaczorowski’s lighting.

Kathleen Marshall’s direction and choreography is wonderfully inventive as always, including a funny bathtub number for Eileen (“Delishious”), and the first act finale with the whole company including the six “Chorus Girls” and men comprising the aunt’s “Vice Squad.” She pushes Broderick to the limit in a lengthy dance number with O’Hara set to “’S Wonderful.”

Most of DiPietro’s dialogue is sharp and snappy like the Bolton/Wodehouse style he’s emulating.

Mind you, it would be wonderful to have an authentic “Oh, Kay!” with its strong original score intact – paging “Encores” – but on its own terms, “Nice Work If You Can Get It” is enormous fun, and if my audience was any indication, a real crowd-pleaser.