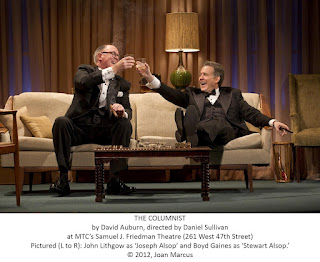 This is a highly absorbing drama from “Proof” playwright David Auburn about Joseph Alsop (1910-1989), the powerful Washington columnist who held sway for decades, and took a particularly hawkish view of U.S. involvement in the Vietnam War.

John Lithgow as the WASPy Alsop gives one of his greatest performances: arrogant, affected in speech, dictatorial, irascible, and passionate in his views on everything from the war to the new crop of political journalists (exemplified here by the young David Halberstam), to the seating plan for his dinner parties. For all of Alsop’s superciliousness, Auburn and Lithgow also paint him as charming and even (however briefly) lovable.

Nowadays, with the blogosphere so pervasive, it’s hard to believe that one man could wield such power, with such clout among the Washington elite during the 50s and 60s until his unrelenting support of our intervention in Vietnam and his increasingly strident anti-Communist stance began to tarnish his image. He was a relation of FDR, later an intimate of John and Jackie Kennedy, a pushy advisor to LBJ after JFK’s assassination. In short, he was someone who could pick up the phone and call just about anybody.

Despite a beautiful wife Susan Mary and a classy, upright lifestyle, Alsop was harboring a secret from most of the world; one that Auburn’s play convincingly contends, fueled his behavior; he was homosexual. A liaison with a young man in a Moscow hotel room in the 1950s – the scene which opens the play -- would make him vulnerable to his enemies, at home and abroad, from then on.

Besides Lithgow’s towering performance, there is superlative work by the impeccable Boyd Gaines as Joe’s brother and writing partner Stewart, his patrician cadence beautifully modulated, and Margaret Colin as his dutiful, but ultimately frustrated wife, never quite bringing herself to mention the elephant on the table that keeps them in separate bedrooms. Rounding out the first-rate cast are Stephen Kunkel as the probing Halberstam, Grace Gummer as the Susan‘s daughter Abigail (actually a composite character), and Brian J. Smith as the Russian man. Daniel Sullivan directs tautly and impeccably.

There’s been some grousing that this play is less fine than “Proof,” and criticizing Auburn for his overall approach. But I found the play riveting from beginning to end, cleverly constructed, and sharply written.

And although the penultimate scene contains a revelation that might have been dramatized – as some have wished -- I disagree. That revelation gains all the more for being conveyed verbally.