All the Way (Neil Simon Theatre) 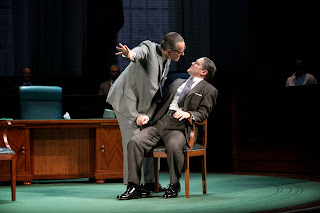 This epic-length history play by Pulitzer Prize-winner Robert Schenkkan (“The Kentucky Cycle”) traces the year leading up to Lyndon Johnson’s re-election after becoming an “accidental president” in the wake of John F. Kennedy’s assassination.

Bryan Cranston, though hardly a doppelganger for the real Johnson – like the other cast members, no one much looks like their real-life counterparts – gives a most impressive performance, demonstrating all the contradictory sides of LBJ’s character: shrewd, savvy, charming, crude, homespun, decent, ruthless, and alternately loving and abusive to wife Lady Bird Johnson (Betsy Aidem). Cranston excels at projecting all these characteristics, and creates the touching portrait of a powerful man who, at the end of the proverbial day, seems to want love most of all.

During that one year, marked by projections which count down the months, we see him struggle to pass the Civil Rights Act of 1964 (at one point, LBJ’s called “the best president for the negro since Abraham Lincoln), manage Martin Luther King’s (Brandon J. Dirden) expectations, cope with racial violence in the South (including three young civil rights workers killed by the KKK during the Freedom Summer in Mississippi) and deal with a scandal involving top aide Walter Jenkins (Christopher Liam Moore).

Many in the cast play two or more roles, and they all do so most capably.

Schenkkan’s play is an intelligent distillation of events, but at nearly three hours, sometimes lags, though Cranston’s charismatic performance remains the very watchable center, and he’s onstage almost every minute.

The whole complex enterprise, which started out at the Oregon Shakespeare Festival (and also played the American Repertory Theater), is lucidly staged by Bill Rauch, artistic director of the Festival.