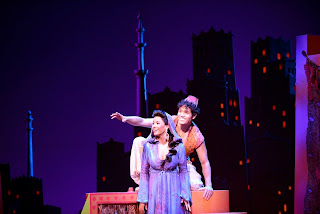 The last of the Alan Menken-Howard Ashman Disney movie collaborations has finally made it to the Great White Way, following the megahit “Beauty and the Beast” and the less successful, but in my opinion, quite delightful, adaptation of “The Little Mermaid.”

Ashman died in the midst of completing the score, and Menken teamed with Tim Rice to finish the job. Rice supplied lyrics to the show’s big ballad, “A Whole New World” and the jaunty “One Jump Ahead,” among other bits.

The present “Aladdin,” like the movie which inspired it, provides a lot of zany fun capturing (to the extent possible) the frenetic animation of the film. If it sometimes comes across as “Kismet” on steroids, well, I guess that’s the idea.

But the most interesting aspect of the enterprise was, for me, the use of the Ashman songs which were deleted or never used in the original film. Apart from, I’m assuming, additional lyrics to the film’s familiar songs – “Arabian Nights,” “Friend Like Me,” “Prince Ali,” etc. – I count three full deleted Ashman songs: “Proud of Your Boy,” a touching ballad whose deletion from the film was, according to interviews with Menken, an especially poignant loss as the song meant much to the team, “Babkak, Omar, Aladin, Kassim,” and “High Adventure.”

Aladdin (Adam Jacobs) has three sidekicks in this telling (Brian Gonzales, Jonathan Schwartz, and Brandon O’Neill) and they figure heavily in the last two named. Jasmine is the attractive Courtney Reed.

The storyline follows the trajectory of the film. Aladdin doesn’t think he’s good enough to win the princess as himself, and has the Genie turn him into a prince, despite everyone’s advice that all he needs to do is be himself, while Jasmine, of course, is completely turned off my his preening egotism, miles from the simple lad she first met (and fell in love with) in the marketplace when she gone there in disguise some time earlier.

Those Ashman songs (and others not apparently able to be fit into the context of Chad Beguelin’s stage book) were included in a lavish boxed set issued by Walt Disney Records to commemorate the partnership, “The Magic Behind the Music,” one worth seeking out on eBay.

There are, as well, three brand new Menken numbers with lyrics by Beguelin, the best being the infectious ditty called “Somebody’s Got Your Back.”

Bob Crowley’s set design is a colorful Arabian fantasy world, and I particularly loved the setting for the cave with its myriad glistening jewels where Aladdin first retrieves the magical lamp. Greg Barnes’ costumes are a gaudy, witty delight in themselves.

Danny Troob’s orchestrations have the right Broadway panache, if not the symphonic lushness of the film score, but register a bit crudely in Ken Travis’ loud sound design.

Casey Nicholaw directs and choreographs with his customary aplomb and imagination.

Where the production falls short, I feel, is in the casting department which seems frankly less than deluxe for a Broadway premiere, though everyone here is talented. That said, James Monroe Iglehart’s Genie superbly captures the manic, schizophrenic quality of Robin Williams’ fabulous voice work in the film, and becomes the audience favorite from his first moments on stage. He really hooks them with the big production number, “Friend Like Me.” There’s also the definitive presence of Jonathan Freeman who recreates his screen vocal portrayal of the villain Jafar, and veteran Clifton Davis as Princess Jasmin’s father.

If not quite top drawer, the show is undeniably lots of fun, and worthy family entertainment, but with plenty to entertain adults. But, above all, it’s a bittersweet tribute to witty wordsmith Ashman whose loss is still felt.

Courtney Reed as Jasmine and Adam Jacobs as the title character in ALADDIN. Photo by Deen Van Meer
Print this post
Posted by Harry Forbes at 5:14 PM