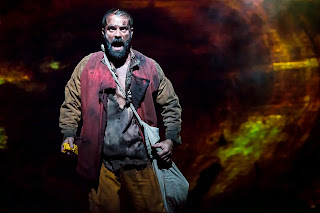 Neither last year’s highly successful film nor repeated showings of the 25th Anniversary Concert of the full show on PBS – much like the 10th anniversary concert before it – has apparently dampened the public’s enthusiasm in the slightest, if the jam-packed audience at my preview performance was an indication. They responded to even the first notes of the overture with ecstatic whoops and cheers.

The work has been running continuously in London since 1985. It didn’t run quite as long on Broadway, though at nearly 7,000 performances, it ranks high in the annals of longest-running musicals. A revival in 2006 ran two years, and lo and behold, now we have a “re-imagined” production directed by Laurence Connor and James Powell, with new orchestrations and striking if overly dark set design “inspired by the paintings of Victor Hugo.” The projections are quite effective, none more so than the famous chase through the sewers. It was this 2009 touring staging that, in fact, we are told, inspired the film.

Despite a few less-than-ideal casting choices, this is a strong, solid revival across the board. Ramin Karimloo, whom Americans saw as the Phantom of the Opera in the PBS airing of that show’s 25th Anniversary concert, is an impressive Jean Valjean, more in the Hugh Jackman mold than the peerless originator Colm Wilkinson. Even greyed-up with a beard, he seems younger than the “old man” described by the libretto, but his acting and singing are very fine, and he brings down the house with his second act “Bring Him Home.”

Will Swenson, latterly of “Little Miss Sunshine,” impresses again with his versatility after polar-opposite roles in that show, “Hair” and “Priscilla, Queen of the Desert.” As Valjean’s single-minded pursuer, Inspector Javert, Swenson makes a strong foil to Karimloo, and powerfully nails “Stars” and his final “Soliloquy.”

Cliff Saunders and Keala Settle play the Thenardiers rather broadly for my taste, but the crowd loves them, as Ms. Settle uses her ample size to funny effect at every turn.

Samantha Hill is a sweet-voiced adult Cosette with a pretty soprano top, and Andy Mientus a decent enough Marius, who has his finest moment with his big solo, “Empty Chairs at Empty Tables.”

Less felicitous are Kyle Scatliffe, whose muddy diction rather undercuts his rousing revolutionary numbers, while Nikki M. James’ vibrato-heavy, pop-styled Eponine is less pleasing than others I’ve heard in the role, though she creates a touching, sympathetic character.

Andreane Neofitou and Christine Rowland’s costumes – from the rags of the poor to the dressy creations of the guests in the wedding sequence (with the Thenardiers decked out in gaudy splendor) are as classy as the rest of the production.

Mick Potter’s sound design, though clear, seems less rich and natural than I remember the original, but perhaps the memory is playing tricks or it was just my position in the house.

The show began promptly at 8, and ended close to 11 p.m., but audience fervor was undimmed by the conclusion. It seems a foregone conclusion that this “Les Mis” is going to be a bona fide hit all over again.