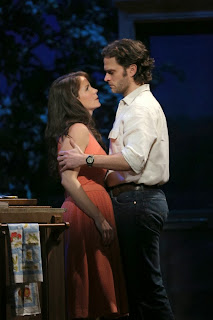 Robert James Waller’s novel -- which also served as the basis for the 1995 film with Meryl Streep and Clint Eastwood – may seem an odd choice for musicalization, but by the time the familiar story reaches its bittersweet conclusion, there isn’t a dry eye in the house. Credit playwright Marsha Norman for making more palatable what is, after all, the story of an adulterous affair. (The musical started life last August 2013 at The Williamstown Theatre Festival.)

Kelli O’Hara, once more in the sensitive hands of director Bartlett Sher (“South Pacific,” “Light in the Piazza”), quite surpasses all her previous fine work with her portrayal of Francesca, a displaced Neapolitan woman living with her husband Bud (Hunter Foster) and their teenage children (Caitlin Kinnunen and Derek Klena) on an Iowa farm. The flatness of the landscape – physical and metaphorical – has her longing for the country she left behind.

When Bud takes the kids to the annual State Fair in Indiana, Francesca encounters Robert, a hunky National Geographic photographer who has come to photograph the famous covered bridges of the area. The attraction is palpable, and though they try to keep a lid on their emotions, it isn’t long before they have fallen passionately in love, and into Francesca’s bed.

What will Francesca do when her family returns? Will she forgo the love of a lifetime for the sake of her clearly decent husband and kids? Therein lays the conflict, and the life-choices theme of the story.

Jason Robert Brown has written a quality score full of lovely, lyrical, ballads, filled with passion and yearning, and all gorgeously orchestrated (by Brown himself). And O’Hara sings them exquisitely. They make full use of her range. Dramatically, she is thoroughly immersed in her character, well beyond merely the Italian accent and dark hair. If you wandered into the theater not knowing it was she, you might almost not know it. The charismatic Pasquale matches her every step of the way, and earns a huge hand for his solo “It All Fades Away.”

Given the intimacy of the drama, with the focus on these two characters, Brown’s musical opportunities are perforce limited. And yet, he has managed to seize every opportunity to vary the mix with, for instance, a number for Robert’s ex-wife, some tunes for Bud (and Foster is excellent, as always), a 1960’s pop ditty, sung with delightful incongruity by Cass Morgan as Francesca’s nosy, but ultimately warm-hearted, neighbor Marge, while the lovers are dancing (“Get Closer”).

Still, the staging is never less than accomplished and nicely fluid.

As indicated, the musical gains in power throughout the evening, and the second act, packed with more dramatic and vocal variety as it is, is completely compelling, and justifies its fervent standing ovation.