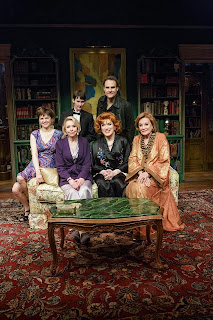 Fans of Charles Busch and Julie Halston scarcely need another reason to book their tickets for “The Tribute Artist” beyond knowing these two wonderful artists are sharing the stage once again. The vehicle for their reunion is the latest in an impressively long string of comedies by Mr. Busch, under the helm of longtime Busch collaborator Carl Andress.

And as well as the stars’ comfortingly familiar presences, we have here an accomplished supporting cast and a fine physical production.

The premise is this. Jimmy (Busch) is a Las Vegas female impersonator – sorry, tribute artist – who resides at the home of wealthy matron Adriana (Cynthia Harris) when he happens to be in New York. Rita (Halston), labeled the internet as “the worst real estate agent in New York,” is his friend and sometime guest at Adriana’s.

When the older woman announces her imminent demise, and indeed, expires on the sofa that very evening, Jimmy and Rita hatch a seemingly foolproof plan: Jimmy will impersonate Adriana, and Rita will be able to sell the apartment for a small fortune.

But they have not accounted for Adriana’s mad-at-the-world niece Christina (Mary Bacon) showing up to claim her rightful inheritance along with her transgender teenage daughter Oliver (Keira Keeley), nor Adriana’s former flame from years ago (Jonathan Walker), a hunky but shady character with, to say the least, a colorful past including the trafficking in body parts.

Of course, Jimmy and Rita’s plan goes wildly awry, but Jimmy’s gracious Adriana – much nicer than the real one, apparently -- wins (almost) all hearts.

“The Tribute Artist” may not be quite Busch’s best work – the plot strains credulity, even given the conventions of farce -- and there’s some raunchy humor that seems a bit out of place for one of the playwright’s “uptown” plays. Still, most of the gray heads in the audience seemed not to mind so perhaps I’m mistaken on that point.

The second act plays much smoother than the fitfully funny first, though the final wrap-up could perhaps still use some fine-tuning.

The cast members are all deft farceurs. Harris is out of the action early on, but she establishes Adriana’s persona vividly, allowing Busch to pick up the interpretation. Bacon comes on stridently, for so the part is written, but soon tamps down the off-putting aggressiveness. Keeley is appealing as her tomboy daughter. And Walker is perfect as the shifty past-his-prime hunk.

Busch is in drag nearly all evening, so he’s able to do what the fans adore, including some homage to Golden Age stars like Bette Davis. Greta Garbo, and even Marilyn Monroe singing “Runnin’ Wild” from “Some Like It Hot.” Halston’s spot-on comic timing is as sharp as ever.

They and the rest of the cast are well outfitted by Gregory Gale, and the action plays out nicely on Anna Louizos’ well-heeled townhouse set.