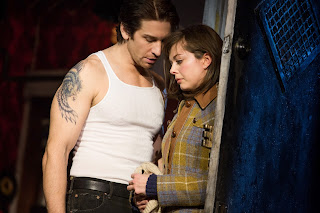 This most unlikely subject for a musical – the latest in an endless line of movie-to-musical adaptations -- turns out to be quite a good one, I’m happy to report. This one, of course, is based on the first film of Sylvester Stallone’s hugely successful franchise about the underdog fighter from Philadelphia, and it's the movie that put its star on the map back in 1976.

The staging of the climactic fight scene is all you’ve perhaps by now heard that it is, but there’s a lot more to this theatrical “Rocky” than those final 15 minutes. Beyond what happens in the ring, it’s a touching story of two damaged, lonely people who find each other, and the scenes between Rocky (outstandingly played by Andy Karl) and Adrian (Margo Seibert very fine in the Talia Shire role) are touchingly acted, and very well musicalized.

The songs that composer Stephen Flaherty and lyricist Lynn Ahrens have written for these interludes are among the prettiest currently on Broadway. Not that there aren’t passages that have all the bombast you’d expect from a show with boxing at its macho center, but the veteran team has concocted a satisfying mix of big moments and intimate ones.

Stallone (here in collaboration with stage-savvy book writer Thomas Meehan) has stuck fairly close to his movie screenplay, if memory serves, and fans of the film will be reassured to find the beloved plotline intact.

Besides the outstanding leads, there’s stellar work from Terence Archie as the cocky heavyweight champion who goes up against Rocky in the big fight, Danny Mastrogiorgio as Adrian’s hot-tempered brother Paulie, Dakin Matthews as the irascible gym manager who becomes Rocky’s coach, and Jennifer Mudge as Adrian’s co-worker in the pet shop and Paulie’s off-again, on-again girlfriend. (Mickey’s “In the Ring” number has the most traditional Broadway showbiz feel.)

Dramatically, everyone registers as solidly as their film counterparts, and the narrative is as absorbing as any non-musical play currently on the boards.

Christopher Barreca’s set design neatly allows for the changing scenes of Rocky’s cluttered apartment, the gym, Linda and Paulie’s place, the pet shop, and so on, with Don Scully and Pablo N. Molina’s video design’s adding high tech projections to the striking visuals. But, as lighted by Christopher Akerlind, the settings capture the film’s gritty look.

The climactic fight sequence which involves the ring moving out over the first rows of the orchestra (with the audience from those seats filing onto the stage as arena extras) is wonderfully executed, allowing for a genuine you-are-there experience.

The whole enterprise is deftly held together by the ever-creative Alex Timbers’ innovative direction.

This is the sort of show that sends you out on a high, and satisfies both hard core theater buffs and novices who might not care much for musicals but love the film. It’s easy to predict a long, lucrative run for this one, and I’d put my money on this being a strong contender come awards time.

Photo by Matthew Murphy
Print this post
Posted by Harry Forbes at 7:49 PM