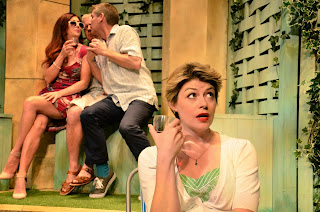 After the droll but basically serious-minded “Arrivals & Departures” and “Time of My Life,” the third offering in the current Alan Ayckbourn mini-festival, “Farcicals,” finds the playwright in unabashedly comic form with two very funny one-act farces. The occasion marks his first outright farce since 1979, and his first foray into the one-act genre since 1983, and it should be no surprise that he excels on both counts.

Each play here features the same four characters, but the respective storylines diverge significantly, apart from the basic situation of two couples, longtime friends, meeting for a summer dinner.

Lottie (Sarah Stanley) is the dowdy, awkward wife of lawn mower dealer Teddy (Bill Champion) who, after years of marriage, frets that he’s on the verge of returning to his pre-marital womanizing. Marriage was supposed to have put an end to all that, and Lottie to have been “the last one.” Unbeknownst to him, Lottie is acutely aware that he’s lost interest in her, and may stray. She confides those suspicions to her old school chum Penny (Elizabeth Boag), poised and attractive, and married to the perennially befuddled car salesman Reggie (Kim Wall).

In “Chloe With Love,” Penny hatches a scheme to dress up Lottie as a glamorous vamp to stir the embers once again with Teddy. But Teddy has already asked Reggie to do whatever it takes to stop him should he ever face temptation. When Teddy predictably starts to succumb to “Chloe’s” charms, Reggie aggressively intervenes with hilarious results.

In “The Kidderminster Affair,” the same basic setup differs in one vital respect which I won’t spoil, and events play out much differently, but the results are no less amusing.

Under Ayckbourn’s own razor-sharp direction, his players prove masters of physical comedy and flawless timing, and after seeing “Arrivals & Departures,” it’s a pleasure to observe their versatility as the characters are so very different.

As Ayckbourn says in his accompanying program essay, these works are happily devoid of serious content. And there’s no denying it’s jolly good fun to experience a distinguished farceur at the top of his considerable game with such an expert cast going through its side-splitting paces.