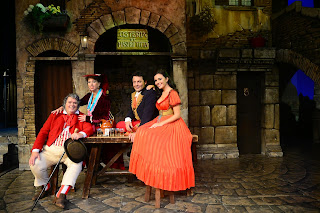 New Yorkers are enjoying a rare opportunity to see the fabled 1962 Italian musical, imported with much fanfare two years later by Broadway impresario Alexander Cohen and British producer Jack Hylton who billed it as “a Roman musical spectacle.” It played the Mark Hellinger Theater but, alas, folded after only a month.

Broadway leading man Alfred Drake had written the dialogue translation and Edward Eager the lyrics, all of which were projected in the then-novel surtitle technique. But it lived on when Warner Bros. issued a deluxe cast album which came with a lavish 32-page booklet.

Still, the show remained extremely popular in Italy, and there were major revivals over the years, and now this “50th anniversary production,” which has already played Rome, Milan and Florence. (Souvenirs are for sale in the lobby.)

The story, which takes place in the Rome of 1830, concerns the rascally title character, a skirt chaser and cocky con artist who bets he can bed the beautiful Rosetta (Serena Rossi), wife of the villainous Papal spy Gnecco (Simone Mori). Along the way, he has a flirtation with a married princess (Valentina Spalletta), and dupes Mastro Titta (Vincenzo Faillal), an unhappy innkeeper (who doubles as an executioner) by matching up the old man with his former mistress Eusebia (Paola Tiziana Cruciani). Rosetta eventually falls genuinely in love with Rugantino, but he comes to be wrongfully accused of the murder of her husband. At the end, he goes to his beheading, transformed from his rakish ways by the Rosetta’s love.

Though a musical comedy, the style is far removed from Broadway, though there are occasional echoes of Maury Yeston’s “Nine” score. Film composer Armando Trovajoli – who wrote such evocative scores for the Sophia Loren-Marcello Mastroanni films in the 1960s – uses very much a pop style here with some period flourishes, and there are some quite pleasing ballads among the more raucous items. The first act finale, “Roma, Non Fa La Stupida Stasera,” is, for me, the musical highlight.

The three-performance run at City Center is marked by a wondrous revolving set which seems to reveal an endless profusion of new scenes, and costumes are consistently eye-filling, courtesy of original designer Giulio Coltellacci. Gino Landi’s choreography was appropriately lively and gay, presumably in the vein of Dania Krupska’s original.

The talented cast of 50, which includes Armando Silverini from the original production, is headed by Enrico Brignano, a comedian of apparently some repute in Italy, who was also responsible for the staging. (The part was originated by the classically trained Nino Manfredi.) Rossi made a fetching love object, and is most appealing as she warmed to Rugantino’s increasingly heartfelt advances. Later, when she thinks he has betrayed her, she sings and danced an impassioned, Aldonza-like number with the male ensemble. Failla makes an endearing sadsack innkeeper.

On the downside, the music is prerecorded which, though slickly done, gives the musical numbers an artificial sound, exacerbated by Ettore Tosoni’s sound design which is pitched uncomfortably loud for both music and dialogue. Sonically, you’d be forgiven for thinking you’ve wandered into “Hedwig and the Angry Inch”! Surely, the original production had more shading and subtlety than this.

The surtitles (seemingly not the original Drake/Eager version) – projected above the proscenium and also to the left and right of the stage – work well enough, though for a non-Italian speaker like me, following the lengthy dialogue stretches proved a bit of a chore over the three-hour length, and I always felt I was a beat or two behind the joke. The mostly Italian audience (minus any language barrier), however, seemed totally caught up in the action, related warmly to the lowbrow, knockabout humor, and flavorful melodies.