Much Ado About Nothing (The Public Theater) 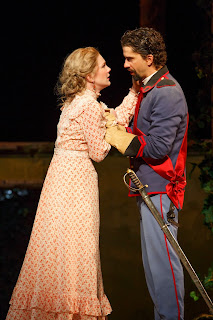 This play has always been a happy one for The Public, as the overview of past Beatrice and Benedicks in writer Matt Wolf’s background article reminds us. From Kathleen Widdoes and Sam Waterston to Blythe Danner and Kevin Kline to Jimmy Smits and Kristen Johnston, and now to the current pairing of Lily Rabe and Hamish Linklater, it has delivered some of the most delightful evenings at the Delacorte.

Of course, the work itself – one of the Bard’s most surefire audience pleasers – has a little something to do with it, but on this occasion, under the assured helm of Jack O’Brien (making his Public debut), the elements are undeniably beguiling.

With a most pleasing set by John Lee Beatty, eye-catching costumes by Jane Greenwood, and deft lighting by Jeff Croiter, the backdrop for Beatrice and Benedict’s entertaining sparring – 1900 Sicily this time around -- is most attractive. On top of that, Broadway’s David Yazbek has composed an especially lovely score.

So, too, this is a particularly skillful cast, with a generally higher quotient than usual here adept at the language.

Brian Stokes Mitchell, for one, makes an engaging, upbeat Don Pedro, so natural and accomplished in his line readings, in fact, that one wonders why he hasn’t done more Shakespeare, unless you count his fragments of Petruchio in “Kiss Me, Kate.” Fans of his musical work will be pleased to learn that, at one point, he joins the musician Balthazar (a sweet-voiced Steel Burkhardt) for a couple of choruses of Yazbek’s tuneful setting of “Sigh No More.”

Also solid are John Glover and David Manis as Governor Leontes and his elder brother Antonio, Ismenia Mendes as his innocent daughter Hero, Jack Cutmore Scott as callow Claudio, Zoe Winters and Kathryn Meisle as Hero’s ladies Margaret and Ursula, Pedro Pascal as Don Pedro’s villainous half-brother Don John, and Matthew Russell and Eric Sheffer Stevens as Conrade and Borachio, Don John’s henchmen in the plot to slander Hero on the eve of her wedding to Claudio.

John Pankow is a very funny Constable Dogberry, whose malapropisms fall in quick succession. The other members of the watch (Matt Bittner, Alex Breaux, and Manis again) comprise an amusing team of sidekicks. As briskly staged by O’Brien, these characters don’t outstay their welcome, as comic characters so often do in Shakespeare.

I must also single out Austin Durant who makes a particularly strong impression as the Friar who’s called upon to marry Hero and Claudio. The unaffected clarity of his readings is exemplary.

Rabe is a deft comedienne, though perhaps more shrewish in her delivery than the merry, enchanting creature she ought to be. Still, in this interpretation, at leasst, the part suits her vinegary tone and dry, sardonic delivery. And Linklater – who plays Benedick in a comically buffoonish manner -- matches her as the ever-so-serious military man grappling with romantic emotions he’s only now allowing himself to express.

It is, of course, highly entertaining to watch Linklater and Rabe’s astonished reactions in those generally foolproof scenes wherein their comrades contrive to have each overhear how smitten each is with the other. The business that O’Brien has devised for Linklater, hiding in the orchard on stage left, falling through the foliage, and gradually working his way towards Beatty’s two-story house, inching closer and closer so he can better hear the speakers, is especially fun, as is the setup for Beatrice as her friends trick her with a similar ruse, and Beatrice hides behind and then underneath a table.

When they finally succumb to a passionate kiss at the end of the play, once all the unpleasantness of Hero’s slander is past, the audience cheers.

It can’t truly be said, however, that this cast matches the great interpreters of the past on purely vocal terms. Recordings of John Gielgud and Peggy Ashcroft, and Rex Harrison and Rachel Roberts, to name but two, prove much more the real deal. And the 1984 RSC production with Derek Jacobi and Sinead Cusack is still the most memorable "Much Ado" of my theater-going life. But, on a beautiful summer night, O’Brien’s production is just fine.

His direction is masterful, and he balances the comedy and darker aspects of the play with ease. The redemptive, love-as-the-great-healer conclusion lands as movingly as it ever has.

(The Delacorte Theater in Central Park, free tix distributed at 12 p.m. on day of performance; through July 6)
Print this post
Posted by Harry Forbes at 4:50 PM