Arrivals and Departures (Brits Off Broadway) 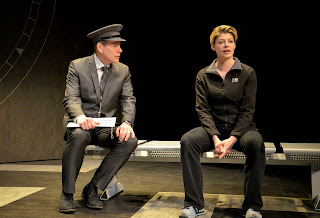 A new play from Alan Ayckbourn – Britain’s most prolific and arguably finest living playwright – is always an occasion to relish, so the prospect of not one, but three, new-to-New York works, as part of the annual Brits Off Broadway festival, is a happy occasion indeed.

The first, “Arrivals and Departures,” is truly new as this is the world premiere production, direct from Ayckbourn’s Stephen Joseph Theatre in Scarborough. In it, Barry, a happy-go-lucky traffic warden (Kim Wall), and Ez (for Esme), a sullen young female soldier (Elizabeth Boag) find themselves teamed as part of an undercover operation at a railroad station to catch the terrorist whom the former had previously encountered during a traffic violation. As the play unfolds, we learn the sad back-stories of both, hers in the first act, his in the second.

Ayckbourn’s writing leans more to the poignant than comic here, though his humorous outlook on the follies and foibles of human nature remains an integral element. Still, the growing rapport between these two highly mismatched souls – and what we observe of their unhappy personal histories -- seems somewhat at odds with the farcical ineptitude of the sting operation of which they are part. Some of the other characters are played as caricatures, written, as they are, in fairly broad strokes.

Besides the outstanding work of Wall and Boag, there’s assured work from Bill Champion, Richard Stacey, Sarah Stanley, Ben Porter, Rachel Caffrey and the rest, most of them playing two or more characters. Wall’s portrayal is particularly impressive, as his sweet-natured character is so obnoxiously gregarious that it’s no mean feat that you feel sympathy for him by the end.

Ayckbourn’s direction is, I guess you’d have to say, definitive, though another director could employ another approach, much like the extremely different spin put on his “Private Fears in Public Places” (which also played 59E59) by filmmaker Alain Resnais in the French movie version.

This is not, by a long shot, one of Ayckbourn’s best works, even among his latter-day output (parts of it are predictable, and much is highly improbable), but there’s a lot to admire here. And though, by the end of the first act, you may feel the play has nowhere left to go, don’t think of leaving, as the second act pulls everything together, and there’s a twist you won’t see coming.