Time of My Life (Brits Off Broadway) 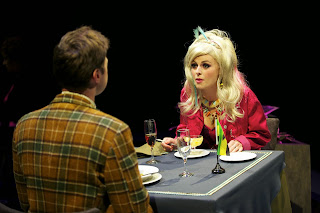 Alan Ayckbourn’s time-shifting 1992 play, inspired by the works of J.B. Priestley, is receiving its New York premiere, courtesy of the terrific Ayckbourn Ensemble from the Stephen Joseph Theatre in Scarborough, England.

The setting is a family gathering to celebrate the birthday of matriarch Laura (Sarah Parks) at their beloved restaurant of some unidentified ethnicity. Besides her tycoon husband Gerry (Russell Dixon), there are her two sons, arrogant Glyn (Richard Stacey) and mousy wife Stephanie (Emily Pithon), with whom he has recently reconciled after, presumably, a dalliance on his part; and aimless younger son Adam (James Powell), his mother’s clear favorite, who has come with his latest girlfriend, lower-class hairdresser Maureen (Rachel Caffrey) who, in short order, becomes woefully inebriated and messily sick, much to possessive Laura’s disdain. The evening, we soon learn, is fated to end with a shocking event.

Ayckbourn’s clever conceit here is to show us the deteriorating relationship between Glyn and Stephanie in the successive months after that meal, while at the other side of the stage, he shows us the relationship between Adam and Maureen in reverse chronology ending with their very first meeting. All the scenes transpire in the same eatery.

As the action shifts from the past to the future for these two couples, we observe, center-stage, the fractious but heart wrenching events which transpired between Gerry and Laura on the night of Laura’s party after everyone else had departed.

As usual with Ayckbourn, for all the characters, the comic setup gives way to poignancy and even, in this instance, tragedy.

Performances are splendid across the board. Ayckbourn’s text brilliantly etches the characters, each one an immediately identifiable personality type, but it’s the actors – under the author’s astute direction, of course – that bring them vividly to life.

The second act offers plenty of revelation as we learn how their lives will turn out, and in the case of Adam and Maureen, the surprising way that couple’s relationship actually began. All of them undergo transformation of one sort or another, and the cast nails them to a tee. Speaking of change, Ben Porter deserves a special shout-out for his deft portrayal of half a dozen waiters, young and old. Though these waiters’ intrusiveness can be irritating – to the audience as much as the characters – they provide the necessary foils for the others to play against.

Photo by Tony Bartholomew: L-R: James Powell and Rachel Caffrey in Alan Ayckbourn’s TIME OF MY LIFE, part of Brits Off Broadway at 59E59 Theaters.
Print this post
Posted by Harry Forbes at 5:14 PM