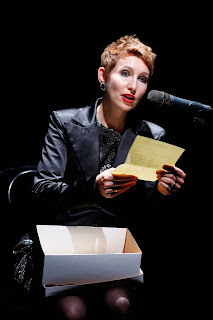 Pat Kirkwood’s name is little known this side of the Atlantic, despite an MGM film opposite Van Johnson to her credit, and a stint in Las Vegas in the early 1950s.

When, on holiday in London in 1989, I happened to attend a Noel Coward tribute entitled “A Talent to Amuse,” I recall being most excited about legendary veteran star Evelyn Laye, but English friends seemed even more enthused about the presence of Pat Kirkwood whom, at that point, I knew little about. She had starred in one of Noel Coward’s lesser-known efforts, “Ace of Clubs” in 1950, and at the tribute, she sang from the show. She was indeed very good, and I remember getting her autograph after the performance.

“Ace of Clubs” and songs from it figure in “Pat Kirkwood is Angry,” a one-woman bio written by and starring a talented singer with classical roots named Jessica Walker who plays Kirkwood, and relates her life story from childhood days in the 1930s singing “On the Good Ship Lollipop” to full maturity and her death in 2007.

Along the way, there was a problematic mother, four marriages (all, but one, failures), various tragedies, a nervous breakdown, and a career that she felt never quite lived up to the potential. She did play the Rosalind Russell part in the original London production of “Wonderful Town” and later received kudos in “Pal Joey,” but she seems to have scored best, and been happiest. in variety and panto (where, as a young woman, she excelled at playing the principal boy roles, once opposite the very young Julie Andrews).

But her Hollywood film -- “No Leave No Love” – was a turkey, and she derides “Ace of Clubs” as second-rate Coward (which it was), though I don’t recall Kirkwood being particularly negative about it at the Coward tribute. Kirkwood blames rumors about an affair with HRH the Duke of Edinburgh, Prince Philip, for tarnishing her reputation and adversely affecting her career. But, in fact, she worked steadily in all manner of musicals, plays, movies, TV, etc.

All in all, Kirkwood’s story, as neatly written by Walker, emerges as a sad – but touching -- one. Lee Blakeley, a director of opera and musicals, moves things along at a good clip. The show was originally co-produced by Opera North and Royal Exchange Theatre, Manchester.

Several of the songs in the early part of the 80-minute show are rather pedestrian, but Walker’s sardonic and resolutely unsentimental telling of Kirkwood’s life holds your interest. Once she gets into the 1950s period, Walker enjoys some really splendid vocal moments, including an exquisite rendition of “Sail Away” and a scorching “Bewitched, Bothered, and Bewildered” to name but two.

Oddly, there’s nothing from “Chrysanthemum,” the 1950s musical which Kirkwood did with husband number three, Hubert Gregg. It was one of her pet projects, though it failed to run despite good notices.

Walker has a voice of quality, and her trained soprano gets a brief but impressive airing in a Gounod selection after which she states that Kirkwood “never sang about the stave again.” Still, in other numbers, Walker employs her attractive soprano top, yet proves she can also belt when the material calls for it. She doesn’t really sound like Kirkwood, and with her close-cropped hair and trim figure, Walker cuts a gamine figure, not much like the voluptuous photos of Kirkwood’s in her prime. But this isn’t an impersonation, and as show is framed as a reminiscence of the older Kirkwood, the physical disparity doesn’t matter.

I don’t know if Kirkwood was as frustrated in life as she comes across here – the account of her being roped into “This is Your Life” is particularly bitter – and yet I was amused to discover that Kirkwood’s “Who’s Who in the Theatre” bio ends with this summation of her hobbies – “Cooking, walking, swimming, and arguing.” So perhaps that’s really the way she was, after all.

(Jessica Walker as Pat Kirkwood, with Joseph Atkins at the piano, in PAT KIRKWOOD IS ANGRY, part of Brits Off Broadway at 59E59 Theaters. Photo by Carol Rosegg)
Print this post
Posted by Harry Forbes at 7:13 AM