Art is Calling for Me (Victor Herbert Renaissance Project Live!) 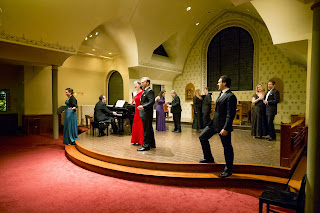 VHRP Artistic Director Alyce Mott has already had a major triumph this year with her massive resurrection of Victor Herbert’s grand opera “Natoma.” And now, the first regular season of her company dedicated to America’s operetta king has gotten off to a splendid start with a richly satisfying cavalcade of favorites, and a handful of lesser known numbers, too. A few more of the latter would have been welcome, a minor carp.

With highly sympathetic accompaniment by Music Director Michael Thomas, and a cast of 10, the selections ran the gamut from Herbert’s first hit “The Fortune Teller” -- soprano Sarah Caldwell Smith opened the program with the gypsy-flavored “Romany Life” -- to lyricist Al Dubin’s setting of the 1919 piano piece that posthumously became “Indian Summer,” a hit for Tommy Dorsey and Glenn Miller in 1939.

The evening was linked with some informative narration penned by Mott and delivered by the singers before or after some of their numbers. It was just enough to set the pieces in their proper context in the Herbert canon and periods. Mott also directed the well-paced evening, staging the numbers with visual variety.

There were plentiful highlights. Bass Matthew Wages delivered a stirring “Gypsy Love Song,” by turns dramatic and caressing, and made pleasing contributions elsewhere. Amy Maude Helfer’s dusky mezzo sang the charms of “Barney O’Flynn,” Irish brogue and all, and several other chestnuts.

Xanthopoulou scaled down her powerful soprano admirably for the “Angelus” from “Sweethearts” then blended well with baritone Justin Ryan’s “Every Lover Must Meet His Fate.” On purely vocal terms, these two were outstanding.

David Seatter, a master at the comic roles, delivered three of Herbert’s most amusing numbers with savvy charm: “A Woman is Only a Woman,” “If Eve Had Left the Apple,” and “Every Day is Ladies Day.”

Lara Ryan, the smooth-voiced lead of the aforementioned “Natoma” reprised a portion of her Indian-themed lullaby “Beware of the Hawk” sounding as good as remembered in that full performance, and she also proved adept at the lighter numbers such as “When You’re Away” (once interpolated into a Deanna Durbin film, we learned), and the evergreen “A Kiss in the Dark.”

Tenor Glenn Seven Allen had fun with “Neapolitan Love Song” strolling up the aisle and serenading the ladies. Soprano Vira Slywotzky lent her plummy soprano to “Toyland” and Adah’s moody “’Neath the Southern Moon” from “Naughty Marietta” (coming up later in the VHRP season, incidentally). And Smith opened the second act brightly with “Art is Calling for Me” number that has seemingly become de rigueur with sopranos ever since Beverly Sills resurrected it in the mid-1970s.

Sweet-voiced tenor Stephen Faulk got to reprise his peerless numbers from Light Opera of New York’s “Eileen” – both “Thine Alone” (sung with Xanthopoulou) and the title song – with ravishingly pure tone. He also sang the part of Christian in the beautiful (and rare) “Since I Am Not For You” trio from “Cyrano de Bergerac” which Mott will be presenting later this season in her own version. (The original book is lost) Faulk was joined by Wages and Xanthopoulou as Cyrano and Roxanne respectively.

The other rarity of the evening was the title number from the 1919 “Angel Face,” a jaunty ditty sung by Helfer. (The number usually done from that show is “I Might Be Your Once-in-a-While.”)

The program concluded with the “Live for Today” quartet from “Naughty Marietta” with Caldwell, Allen, Wages, and Slywotsky skillfully handling the overlapping vocal parts before being joined by the whole ensemble.

All the singers got high marks for presenting the material with just the right style and reverence, with only an occasional issue with diction or pitch from some.

Emily Cornelius provided some pleasing choreography for “Jeannette and Her Wooden Shoes” from “Sweethearts,” as Helfer sang the sprightly saga with Faulk, Seatter, and Wages cavorting around her in delightful fashion. And Cornelius also devised some appropriate vaudeville shtick for Faulk and Ryan's "Streets of New York" which concluded the first act.