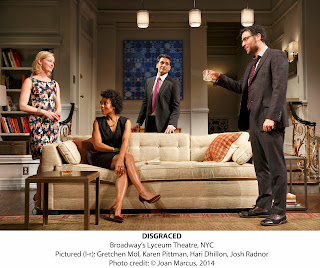 Here’s a powerful and complex play that feels as relevant and timely as ever a play did.

Ayad Akhtar’s Pultizer Prize winner concerns an affluent Manhattan couple. Amir is a high-powered Muslim-American corporate lawyer (Hari Dhillon), who has renounced his religious heritage and concealed his father’s Pakistani birthplace from his employer. Emily’s an American artist (Gretchen Mol) thoroughly enamored of the exoticism of Islam which she incorporates into her works.

When the play opens, she’s painting Amir in a modern-day version of Velázquez’s famous portrait of his Moorish slave Juan de Pareja dressed like a nobleman, symbolically foreshadowing Amir’s own identity issues and the ways in which others perceive his ethnic background. Amir’s Muslim nephew (Danny Ashok) has gone further than Amir in changing his real name to Abe in order to assimilate more fully into American culture.

Emily and Abe implore Amir to give legal assistance to an incarcerated imam being held on suspicion of funding terrorist activity. Amir is reluctant to be identified, even unofficially, with such a cause, but eventually gives in to their compassionate pleading, an action that will have dire consequences.

Meanwhile, Emily is hoping to learn that their friend, Jewish art curator Isaac (Josh Radnor), will include her paintings in his upcoming exhibit. When Isaac and his African-American wife Jory (Karen Pittman), who works with Amir at his (mostly Jewish) law firm come to dinner, the pleasant banter about fennel and anchovy salad between Amir and Isaac, degenerates into an ugly and heated exchange about 9/11, Israel, and other hot-button topics.

The fireworks that ensue bring to mind something of the emotional dynamic in Yazmena Reza’s “God of Carnage.”

Playwright Akhtar’s aim seems to be to elucidate the difficult and conflicted role of Muslims integrating into a different culture, and the importance of being true to oneself. Amir’s denial leads to his undoing and “disgrace.” Yet, when he takes an action that affirms his heritage – defending the aforementioned imam – it leads to his undoing.

And though Amir disparages the Koran, his heinous subsequent actions are precisely what he professes to loathe in Islam. So are we to believe that one must be true to one’s identity, even if so doing, results in something patently wrong? Or is Akhtar saying that we cannot ever break free of our heritage, whatever they may be?

The performances are excellent, most especially Dhillon as the conflicted protagonist. He played the role at the Bush Theatre in London to acclaim.

Director Kimberly Senior keeps the action taut and strikes just the right balance between the lightweight urban chitchat, and the underlying tensions.