The River (Circle in the Square) 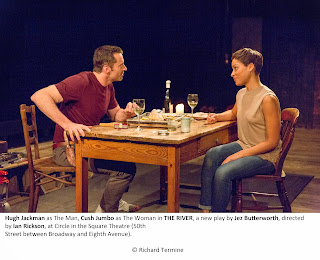 Jez Butterworth’s head-scratcher of a play concerns a dedicated fisherman identified only as The Man – that’s Hugh Jackman, as you’ve no doubt heard -- and the woman (or women) of the moment he brings to his cabin to share the sublimely poetic experience of catching trout. (Yes, that’s a gross oversimplification, but one that pretty much sums up the action.)

A winning actress named Cush Jumbo plays The Woman who shares The Man’s cabin in the opening scene. But after he finally persuades her to make the much talked-about expedition to the river, we next realize The Man has lost her in the darkness, and he’s frantically calling the police.

Suddenly we hear an offstage female voice. So The Woman’s not missing after all, we presume. Yet the actress who now enters is someone quite different. She’s The Other Woman, and is played by Laura Donnelly (who originated that role in London). She relates how she went wandering off on her own, and caught a three-pound fish with the help of a poacher. She’s clearly high as a kite, and she teases The Man sexually about what else she and the poacher may have been up to.

Throughout the remainder of the 85-minute play, the two actresses alternate scenes. It would be a spoiler to reveal further details, but suffice to say, we’re kept guessing if this is the same woman, another girlfriend from The Man’s past or future, or perhaps just a delusion on The Man’s part.

There’s an awful lot of talk about fish and fishing, and, at one point, The Man actually prepares and cooks a fish onstage. (Jackman executes this slimy task most expertly, if you were wondering.)

The play originated at London’s intimate Royal Court (where Jackman’s part was created by Dominic West), and it was directed by that theater’s artistic director, Ian Rickson. He's Butterworth’s longtime collaborator, having directed six of his plays including the superior “Jerusalem” which starred Mark Rylance and which played to acclaim in 2011.The play very much bears the hallmarks of a Royal Court play; theatergoing visitors to London will understand exactly what I mean.

On this occasion, Rickson keeps the action taut and reasonably suspenseful, as much as the somewhat talky script will allow.

The performances are all very fine, and this is Jackman’s first non-musical work on Broadway since the 2009 “A Steady Rain” opposite Daniel Craig, in which both men did compelling work. This is far less gripping than that Chicago-based police drama. And the thrill of seeing Jackman live – and the enjoyment of his accomplished acting (and that of his confident co-stars) -- is diminished by the enigmatic storyline which lacks the resonance of a Pinter or an Albee in similar mode. On first hearing, I couldn’t begin to explain what the play is really about.

The scenic design by Ultz, lighting by Charles Balfour, and sound by Ian Dickinson for Autograph create the requisite moody ambience.

After the show, Jackman auctioned off one of his T-shirts for Broadway Cares/Equity Fights AIDS, which made for a cheery postscript to the murky action which preceded it.