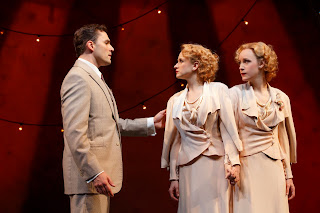 I was never one of those rabid cult followers of the 1997 “Side Show,” composer Henry Krieger and book writer/lyricist Bill Russell’s musical about the Hilton sisters, Siamese twins who went from the sideshow to vaudeville to Hollywood (Tod Browning’s film “Freaks” for one), which closed after a modest run and lived on through its cast recording and regional revivals. I did catch the original production, and I recall being lukewarm about it. A comparison of the current Playbill with the original CD song listing shows that several numbers have been dropped or rejiggered, including the lengthy “Tunnel of Love” sequence.

I have no reservations about the latest revival, however. From start to finish, the show really crackles now. So whatever cuts and emendations have been made have been clearly all to the good.

Emily Skinner and Alice Ripley won all hearts, of course, with their original portrayals of Daisy and Violet, English born orphans sold to a manipulative woman they were forced to call “auntie,” and her abusive husband Sir (an excellent Robert Joy) who, after his wife's death, became their guardian, and later would run the sideshow, but Emily Padgett and Erin Davie are equally appealing, giving superb performances. Vulnerable at the start, they grow in confidence as the story progresses, and their distinct personalities emerge. Daisy loves the spotlight; Violet simply yearns for normalcy.

The leading men match them: Ryan Silverman as Terry, the vaudeville talent scout who helps the sisters break free of Sir, and turns them into headliners, Matthew Hydzik as his colleague, vocal coach and choreographer Buddy, who polishes the girls’ act, and David St. Louis as Jake, the black worker who befriends the girls, and leaves the sideshow with them when they sue for their freedom. (“Say Farewell to the Sideshow” is a particularly touching number at that point.)

As time goes by, Terry loves Daisy but can’t move past the fact of her conjoined condition; Buddy loves Violet but has issues of his own.

The ensemble is quite remarkable, doubling in multiple roles throughout the show.

Director Bill Condon directs the dramatic scenes and the musical numbers with equal aplomb, and the vaudeville numbers within the show – “Typical Girls Next Door,” “Stuck with You,” etc. – are especially enjoyable, particularly “Ready to Play,” a number reminiscent of “Le Jazz Hot,” from “Victor/Victoria” against scenic design David Rockwell’s Art Deco backdrop, with the girls dazzlingly attired in red gowns and dancing with the chorus boys to Anthony Van Laast’s lively choreography.

Buddy’s vaudeville turn, as he anticipates marriage to Violet, “One Plus One Equals Three” – a sort of amalgam of “Buddy’s Blues” from “Follies” and “Two Ladies” from “Cabaret” – is another standout.

Davie and Padgett blend poignantly on their big ballads “Who Will Love Me As I Am” and “I Will Never Leave You.” And St. Louis’ delivers his moving ballad, “You Should Be Loved,” movingly though with a grittier quality than Norm Lewis did in the original.

This revival’s a winner.