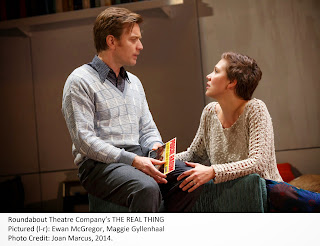 It must be admitted that director Sam Gold’s production of one of Tom Stoppard’s most accessible and entertaining plays dealing, atypically for Stoppard, with matters of the heart as much as the intellect, somehow doesn’t quite hit the mark, despite many good elements, chief of which is the engaging presence of Ewan McGregor in his Broadway debut.

McGregor is Henry, a Stoppard-like playwright grappling with what is “real” both in terms of his love life, and the situations and dialogue in his plays.

Maggie Gyllenhaal – no stranger to the New York theater scene – is also in fine fettle, and her appearance marks her first official outing on the Great White Way as well.

But Gold’s production – dominated by David Zinn’s oppressively dreary white sectional set which runs the considerable length of the American Airlines Theatre stage – seems not quite to be the real “Real Thing.”

I was lucky enough to catch the 1982 London premiere with Rogers Rees and Felicity Kendal in splendid form, though the play would actually undergo revisions after that. Still, subsequent productions have never seemed quite as definitive as that first one, directed by Peter Wood, including Mike Nichols’ excellent 1984 Broadway production with Jeremy Irons and Glenn Close in Tony-winning form, and David Leveaux’s 2000 revival with Stephen Dillane and Jennifer Ehle, similarly honored.

The play opens with a confrontation between a husband (an excellent Josh Hamilton with all too little to do) and an adulterous wife (Nixon) but, in short order, we learn this is only a scene from Henry’s latest play, and that the actress playing the wife in the play is the aforementioned Charlotte and the character of the cuckolded husband is their friend Max who is married to another actress, Annie (Gyllenhaal). But here’s the twist: Henry is actually cheating on Charlotte with Annie.

When the affair comes to light, Henry and Annie leave their respective spouses and marry, but there’s trouble ahead in the persons of a jailed Scots protester (Alex Breaux) whom Annie has taken under wing, and whose pathetically mediocre play Annie pressures Henry to edit, and Billy (Ronan Raftery), a young actor with romantic notions appearing opposite Annie in “Tis Pity She’s a Whore” in Glasgow.

Not all the English accents have the authentic ring, but they’re reasonably decent. And some of Gold’s touches are off-putting, including extraneous musical interludes with cast members singing the sort of 1950s and 1960s pop songs of which Henry is hopeless enamored. Speaking of singing, we do get to hear McGregor sing a bit, which reminded me of his charismatic Sky Masterson in Michael Grandage‘s 2005 London “Guys and Dolls,” one which, sadly, did not come to Broadway.

But he’s likewise impressive here, handling Stoppard’s long speeches with considerable aplomb, including a particularly memorable one in which he likens good writing to a well-made cricket bat. Without the craftsmanship, it would just be a plank of wood.

And he also skillfully limns the vulnerability beneath Henry’s erudition.