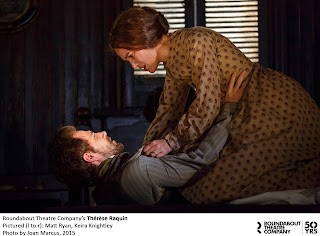 Therese, the orphaned niece of Madame Raquin, has been raised by her aunt to marry the latter’s sickly and self-absorbed son Camille. Therese obediently goes through the paces of the wedding and the routine of early married life, but as soon as she meets Camille’s old friend Laurent, her true passion ignites. When it becomes obvious that Camille is their only obstacle to happiness, Laurent suggests murder, but the ensuing deed – which put some in mind of the Montgomery Clift and Shelley Winters rowboat scene in “A Place in the Sun” -- brings nothing but guilt and misery.

Gabriel Ebert as the ineffectual Camille, Matt Ryan as the hunky Laurent, and Judith Light as Camille’s loving but domineering mother are all terrific. I must single out the chameleon-like Light for yet another of her indelible performances, one quite different from anything she’s done before.

The smaller parts are just as well cast – David Patrick Kelley as Michaud, Mary Wiseman as his lovelorn niece Suzanne, Jeff Still as Grivet as the Raquins’ weekly domino-playing guests – and form a perfectly judged ensemble.

Hats off to director Evan Cabnet for mounting such a superbly compelling production. This is one period piece that seems convincingly authentic to the era.

Helen Edmundson’s adaptation – different from the one Zola himself wrote for the stage a few years after the novel – is quite stage-worthy, and the plot plays out in appropriately heated fashion. There was some tittering from a few audience members at my performance, but I took that to be more nervous than derisive laughter at the horrific events that unfold.

There is a wonderfully dank and oppressive mood sustained all evening, broken only by those occasional humorous interludes when the friends (Grivet, Michaud, and Suzanne) come to visit. When matters take an almost supernatural turn, the mood turns genuinely frightening.

Before attending myself, I had heard some people grouse that the production seemed slow moving, but I can’t imagine how anyone could be failed to be gripped by the dramatic story with its elements of Hitchcockian suspense. This is good old-fashioned melodrama in the best sense of the word.

To my mind, this outstanding production trumps both Marianne Elliot’s excellent staging at the National Theatre about 10 years ago, and also Harry Connick, Jr.’s 2001 musical Southern transplant of the story, “Thou Shalt Not.”