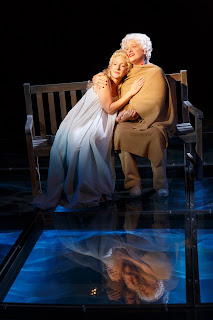 This is an alternately humorous and poignant musical built around the daughters and wives of our recent presidents. With two scenes to each act, Michael LaChiusa’s musical begins with the frenetic preparations for Julie Nixon’s wedding to David Eisenhower, followed by a fanciful dream sequence as imagined by little Amy Carter and involving Betty Ford and daughter Susan Ford, and her mom Rosalynn Carter and filled with nightmarish mayhem.

The second, and overall more compelling, act opens with a cool Nancy Reagan lounging poolside as unhappy daughter Patti Davis stridently rails at her for being a bad mother, and the final scene, as with the Carter sequence, dealing with the fantastical as a lonely Barbara Bush waits on a bench for her annual encounter with the ghost of the daughter she lost 50 years earlier at the age of three, while daughter-in-law Laura Bush intrusively keeps urging her to start packing and hit the campaign trail for her son George.

The cast is uniformly superb. Tonji-Leslie James’ costumes and Robert-Charles Vallance’s wigs transform the ladies into more than plausible likenesses of the actual people.

They are a versatile bunch too. Rachel Bay Jones is warmly sympathetic as both Rosalynn Carter and Laura Bush. Theresa McCarthy plays both Pat Nixon’s mother Hannah and the ghost of Robin Bush in that poignant last scene. Alison Fraser is a picture-perfect Betty Ford in the dream sequence, and then a coldly unflappable Nancy Reagan. Caissie Levy appears first as a frenetic Julie Nixon and then the angry Patti Davis. Betsy Morgan takes on both Tricia Nixon and Susan Ford.

Under Kirsten Sanderson’s sensitive direction (choreography by Chase Brock), they make a finely tuned ensemble. (Sanderson actually directed LaChiusa’s prequel the “First Lady Suite” in 1993, and she clearly has an affinity for the material and the talented composer.)

For all its worthy elements, the show does feel too long. Much of the score is recitative, rather than a hummable succession of take-home tunes. And yet, every so often, LaChiusa surprises us with a ravishing melody, and the overall palette is very pleasant, except for the scenes of conflict.