On Your Feet! The Story of Emilio & Gloria Estefan (Marquis Theatre) 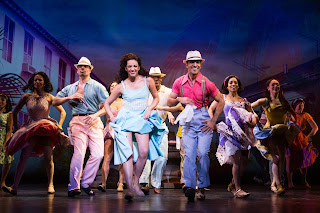 “Crowd-pleaser” is the operative word here. This latest jukebox musical bio – its subject self-evident by its subtitle – may not be the best of the genre, but I’m duty-bound to report that most of the audience had a simply wonderful time.

Alexander Dinelaris’ book probes less deeply than, to cite a couple of current examples that presented a more warts-and-all perspective, “Jersey Boys” and “Beautiful,” and the songs register as even less theatrical than in those others. So, too, much here feels blandly formulaic.

We get Emilio Estefan’s early meeting with Gloria, followed by the Cuban-American couple honing their distinct Miami Sound Machine style, breaking into the business, falling in love, fighting the skeptical establishment about becoming crossover artists, taking their records directly “to the people” to generate interest, and their ensuing successes and vicissitudes including, most dramatically, the 1990 car accident that nearly left Gloria paralyzed. But it’s all related in the sketchiest of terms.

It must be said that attractive Ana Villafane does a capital job as Gloria as she transforms from hesitant Miami teenager to confident performer (Alexandra Suarez plays her well a youngster, too), and husky-voiced hunk Josh Segarra makes a sympathetic Emilio, but it’s Andrea Burns as Gloria’s stern but caring mother, and Alma Cuervo as the “you’ve got to follow your dreams” grandmother who anchor the show with what little substance it has. Eliseo Roman as Gloria’s incapacitated Vietnam vet father (crippled with multiple sclerosis) gets to shine in a couple of particularly good vocal moments.

The Estefan songs are given good measure (the couple provided their own orchestrations) under Lon Hoyt’s sharp musical direction, though your enjoyment of the show will largely depend on your familiarity with, and affection for, their salsa-infused sound.

This is a flashy dancing show, and Sergio Trujillo’s choreography and the direction of Jerry Mitchell, who knows a little something about dancing himself, keep the momentum going satisfyingly.

David Rockwell’s varied sets (including some Havana flashback scenes), ESosa’s colorful costumes, and Kenneth Posner’s lighting are all state of the art, though I found SCK Sound Design’s sonics at times uncomfortably loud.

“I’d see this again,” remarked a matronly lady upon exiting the theater. Her friends enthusiastically agreed, confirming the show’s genuine appeal to its intended audience.