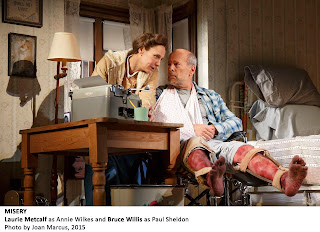 Of course, thriller plays have always held a valid place in the theater, be it “Angel Street,” “Night Must Fall,” or “Wait Until Dark,” so perhaps the story’s stage-worthiness should not be so unexpected.

For those unfamiliar with the source material, the story concerns a best-selling writer named Paul Sheldon (Bruce Willis) who has written a series of Victorian novels featuring a heroine named Misery Chastain. He’s rescued from a car wreck near the hotel retreat where he’s gone to write by a plain-speaking local woman Annie Wilkes (Laurie Metcalf) who claims she’s his “number one fan.” She idolizes the Misery character and, by extension, Misery’s creator, but turns out to be psychotically obsessive, keeping him prisoner in the bedroom of her snowed-in house. And when she learns that Misery is to be killed off in the latest book, her fury knows no bounds.

Though most of the action is confined to the bedroom as Sheldon is recovering from his serious injuries, David Korins’ ingeniously revolving stage allows for smooth movement to the other areas of the house when the action needs to shift there, or to the front of the house when the local sheriff (Leon Addison Brown) comes to make inquiries about the missing author.

Metcalf is tremendous in her physically and vocally demanding role, making the Kathy Bates part her own. Her Annie is scarily realistic. Willis returns to the stage in an accomplished if perforce low-keyed performance, skillfully conveying Sheldon’s attempts to manipulate the woman he soon comes to realize is far from the angel of mercy she first appears to be. So, too, he’s extremely adept at all the tricky physical maneuvering that his character must do as the play progresses. But Metcalf, like Annie, has the lion’s share of dialogue and dominates.

For all the skill involved, there’s no denying this is a very unpleasant story – albeit with many humorous moments – and you may find yourself as queasy as I did for all of its intermissionless 90 minutes, even if you remember how it ends.