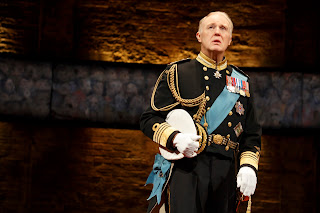 What a devilishly clever play Mike Bartlett has concocted! It premiered to great acclaim in 2014 at London’s Almeida Theatre before transferring to the West End. As you’ve no doubt heard by now, it’s a what-if story concerning Prince Charles assuming the throne after long-reigning mum Queen Elizabeth II’s death in a not-too-distant future.

So we have not only Charles himself, brilliantly played by Tim Pigott-Smith, but all the other royals we read about so often in the tabloids, such as Camilla, Princes William and Harry, and Kate.

The play begins with silhouetted figures gathering as a chorus intones a requiem for their late monarch (appropriately magisterial music by Joceyln Pook). We soon learn that even before Charles’ impending coronation, the new king has already assumed his powers, such as they are, for a figurehead ruler.

And so it is that during his first weekly meeting with his Labor Prime Minister -- the fictional Mr. Evans -- when the latter presents him with a privacy bill for signature limiting the freedom of the press after a major hacking incident, Charles refuses his royal assent without alterations to the bill. For even though the press have been hurtful to the royal family -- even instrumental in his late wife Diana’s death -- he believes deeply that it is wrong to silence them.

Evans tries to explain diplomatically that it’s not the monarch’s role to do more than sign as a formality, but Charles holds firm to his convictions, leading to a government crisis.

The press issue was a clever invention of Bartlett, and the playwright underscores the point further as the press gets wind of Harry’s friendship with republican commoner Jess (likably portrayed by Tafline Steen) – a young woman the red-headed playboy meets and falls for in a club -- and run compromising photos of her.

And then there’s Bartlett’s extraordinary use of iambic pentameter throughout, giving the play a Shakespearean quality as the device imparts extra gravitas and also, at times, levity to what would otherwise be straightforward prose.

Though there is considerable humor in the play, on the whole, this is a serious examination of monarchy, democracy and the corrupting aspects of power. The second act even approaches something akin to tragedy – think Shakespeare’s “Richard II” for one -- and is mightily poignant. And there are numerous other allusions to the Bard throughout. Brief appearances of the ghost of a prophesying Diana recall the witches in “Macbeth.” And The Duchess of Cambridge (Kate) certainly beings to mind Lady Macbeth in Bartlett’s telling. Harry, very engagingly played by Richard Goulding, is Bartlett’s Prince Hal prototype.

The first act is just about perfection and ends with a brilliant dramatic cliffhanger. The second act is even more fast moving as it hurtles towards its inevitable conclusion.

This is the role of Pigott-Smith’s career as he etches a man of growing confidence and sincere conscience but not without ego and some pomposity, and heart-wrenchingly pathetic as his dreams are thwarted.

The rest of the cast is outstanding, too, including Lydia Wilson as an ambitious Kate, Oliver Chris as a too-pliable William, and Margot Leicester as a supportive but out-of-her-depth Camilla.
Adam James is strong as the adversarial prime minister, but equally good, at my performance was first-timer in his role Peter Bradbury, subbing for Anthony Calf, as the leader of the opposition.

One wonders what the royal family would really make of all this, including the validity of the characterizations. But no matter; they certainly seem as we imagine them to be, which adds to the fun.

Rupert Goold’s ingenious staging keeps the drama moving with cinematic fluidity. Pook’s music (played by a live ensemble in the stage left box) reinforces the grandeur of the events depicted, such as the Queen’s funeral and the ultimate coronation. Tom Scott’s spare but evocative designs (a raked staged and brick walls) and spot-on costuming, Jon Clark’s dramatic lighting and Paul Arditti’s astute use of sound all enhance the drama.

This witty and ultimately moving play is not to be missed.