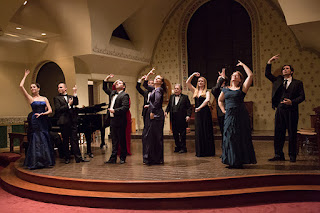 What a pleasure to have a full concert of Victor Herbert music with not an “Ah, Sweet Mystery of Life” or a “Kiss Me Again” within earshot!

Not only was the evening – lovingly and ingeniously compiled by VHRP Artistic Director Alyce Mott and Music Director Michael Thomas – refreshingly devoid of overly-familiar chestnuts such as those, but there were, in fact, no sentimental ballads at all. This was Herbert in a strictly comic vein, with the songs drawn from lesser-known shows such as “Babette,” “The Lady of the Slipper,” “The Princess Pat,” and “The Viceroy,” the last, we learned, one of four shows the prolific Herbert opened within six months.

Only the most diehard fan would have been familiar with most of this material.

Herbert’s lyricists such as Harry B. Smith (and his brother Robert B. Smith), Glen MacDonough, and Henry Blossom were given respectful credit in Mott’s informative and entertaining intros to each song, delivered engagingly by the soloist of the preceding number. And, indeed, Herbert’s collaborators – often dismissed as hopelessly old-fashioned – demonstrated solid craftsmanship and real comic flair.

The 11 singers were well chosen with the requisite Herbert style down to their fingertips. Everyone was off book, and the evening was expertly staged by Mott with several of the numbers delightfully choreographed by Emily Cornelius.

The title derived not, as some aficionados might think, from Herbert’s obscure operetta “The Tattooed Man” (in fact, one of his lesser efforts), but from two droll songs taken from other shows: “My Angeline,” from his 1895 “The Wizard of the Nile,” and “The Tattooed Man,” a sort of rebuttal to the earlier song, written for the 1897 “The Idol’s Eye,” wherein the character in “My Angeline,” who discovers, to his horror, he has married a circus contortionist, gleefully now observes that she went on to wed a “human picture gallery” who has now taken her money and deserted her. (Yes, it’s that kind of wacky humor.)

Of the 22 songs, culled from an initial list of 65 as Mott announced, there were bountiful highlights.

Of the baritones, Matthew Wages wittily handled the two titular songs; Bray Wilkins declared “I Wish I Was an Island In an Ocean of Girls” (“The Princess Pat”) with fine style and graceful music hall strutting; strong-voiced Robert Balonek did the “Rockabye Baby” variations of the “Song of the Poet” (“Babes in Toyland”) with panache; and David Seatter gamboled down the aisle merrily as he explained “That’s Why They Say I’m Crazy” (“Wonderland”).

As for the tenor contingent, Stephen Faulk amusingly mimed his paean to self-admiration, “I, and Myself, and Me” (“Wonderland”) and Mitchell Roe crooned the very cute “Love By Telephone” (in tandem with Katherine Corle) (“Dream City”), and paired amusingly with Seatter on “The Ossified Man” (“Wonderland”). 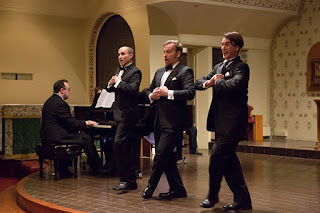 Earlier, Corle handled the very beguiling “Call Around Again” (“The Debutante”); big-voiced Vira Slywotsky joined Faulk for the humorous “Only in the Play” duet (in which she mistakes onstage ardor for the real thing)(“The Fortune Teller”), and later sang the “Come Little Fishes” solo (“The Enchantress”); Sarah Caldwell Smith performed her slightly naughty “Always Do As People Say You Should” (“The Fortune Teller”) with just the right innocence; Angela Christine Smith saucily related the saga of a taffy-seller known as “Popular Pauline” (“Wonderland”) and joined Corle and Erika Person on “Make Him Guess” (“The Princess Pat”); and Person stepped off the stage to warn the audience of the disapproving “Mrs. Grundy”(“Old Dutch”).

Thomas’ accompaniment was apt at all times, his playing as witty as the delivery of the singers.

Mott’s passion for Herbert is infectious, and she has several free events are coming up, and the next full production is “The Fortune Teller” on March 9th and 10th, and a rarer 1897 work, “The Serenade,” after that. The concert, in fact, closed with two numbers from the latter show, and they most definitely whetted the appetite for more.