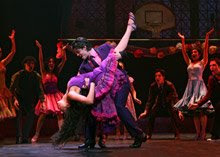 It was hoped that book writer Arthur Laurents would work the same magic with this 1957 classic as he did with last season's "Gypsy." As with that musical, he has made some changes to his original book which, as everyone knows, is a modernized "Romeo and Juliet," set on New York's West Side with the Jets gang in deadly struggle with the Puerto Rican Sharks.

Laurents has taken a fresh directorial approach -- the most publicized change this time is the use of Spanish for the Puerto Rican characters -- but the results are somehow less revelatory.

Still, the public is welcoming back this much-loved show in droves, which has much going for it. Argentinian Josefina Scaglione makes a most delightful Maria, Karen Olivo a fiery Anita and Matt Cavenaugh a sympathetic Tony, who like Scaglione, sings beautifully.

The show does occasionally show its age, as with the comic point number "Gee, Officer Krupke" which, though well done, seems a bit frivolous in this serious context.