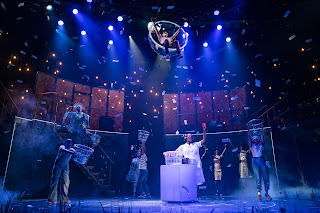 This is a terrific revival of the 2003 show with a powerhouse performance by Sharon D. Clarke, winner of the 2019 Olivier Award for Michael Longhurst’s production from the Chichester Festival Theatre.

The 39-year-old titular character has been a maid for 22 years, earning a mere $30 a week to support her children. She toils in the basement of the Louisiana-based Gellman family’s house with an anthropomorphized washing machine (Arica Jackson), radio (Nasia Thomas, Nya, Harper Miles), and dryer (Kevin S. McAllister) her daily companions. Motherless Noah, the eight-year-old boy of the house, idolizes Caroline who lets him light her cigarettes in a daily ritual. Noah’s ineffectual clarinet playing father Stuart (John Cariani) is distant, and his ditsy new stepmother Rose (Caissie Levy) fails to connect with him.

When Rose instructs Caroline to keep any change she finds in Noah’s pockets to teach the boy the value of money, patronizingly telling her she can consider it part of her salary, the gesture rankles the proud Caroline who is torn between not wanting to take a child’s money and, in fact, desperately needing something extra for her own kids’ food and medical expenses.

Meanwhile, Caroline’s daughter Emmie (Samantha Williams) disdains what she views as her mother’s lowly position. And Caroline’s friend Dotty (Tamika Lawrence) tries vainly to get through to her.

Adding to the family dynamic are Noah’s grandparents (Stuart Zagnit and Joy Hermalyn), and in the second act, Rose’s rabble-rousing father (Chip Zien) who disparages Martin Luther King’s notion of nonviolent protest, and speaks of a real revolution.

The cast is very strong throughout, not forgetting the fine work of Tonya Pinkins’ Caroline and Anika Noni Rose’s Emmie in the original New York production. Clarke is a pillar of determined resignation, the very picture of a woman whose spirit has been crushed, and who simply can’t change, thus the punning title. So convincing is her portrayal that it’s almost briefly startling to see her come out for a curtain call. On the heels of her Olivier Award across the pond, she’s sure to be a hot contender here come awards season. She’s a commanding actress and an electrifying singer.

Adam Makke was Noah at my performance (there are three alternates), and he was truly remarkable, sparring well with Clarke. Caissie Levy, in a far cry from her last Broadway appearance as Elsa in “Frozen,” was spot-on as the perennially discomfited Rose. Williams’ Emmie had plenty of fire and a show-stopping voice of her own. Veteran Chip Zien sparked the second act with his feisty portrayal.

McAllister, with his deep bass, makes a strong impression not only in Chuck Cooper’s original role of the dryer but also later, as the bus who sonorously informs Caroline and Dotty of John F. Kennedy’s death. And N’Keenge brings a lovely presence and ethereal vocalizing to the omnipresent moon.

The Jewish elements of Kushner’s script didn’t sit well for at least one audience member who during a tense scene between Noah and Caroline gratuitously yelled out “Anti-Semitic”!

The Motown and klezmer infused score by composer Jeanine Tesori with lyrics (and book) by Tony Kushner is filled with good things, including some ravishingly beautiful concerted numbers.

Fly Davis’ two-level, turntable set provided a deftly workable playing area, and the split down the middle visually underscored the gulf between certain characters like Rose and Noah. Davis’ costumes captured the 1963 time frame and, in the case of the appliances, were quite witty (e.g. soap bubbles on the Washing Machine’s dress, antennae on the three Motown-inspired radio gals, a red loop around the dryer’s neck, etc.). 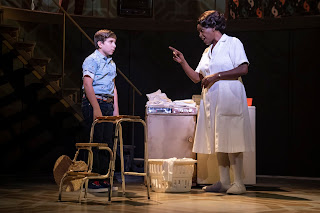 Technical credits were all top of the line, but Paul Arditti’s sound design was, like so many shows these days, pitched way too loud, rendering some of Kushner’s important lyrics unintelligible. Caroline’s big eleven o’clock number with its repeated refrain of “slam goes the iron” was mush, no fault of Clarke’s.

Print this post
Posted by Harry Forbes at 10:53 AM