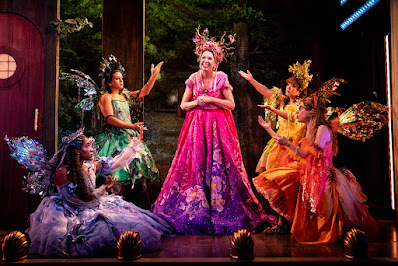 The unfailingly amusing Douglas Carter Beane has written and directed a promising mashup of “A Midsummer Night’s Dream,” and a handful of fairy tales all turned on their ear in the similar vein of  “Into the Woods”  But on this occasion, the result is an extremely thin diversion that, in greatly condensed form, might have made a nice curtain raiser for something more substantial, perhaps thematically related.

In fact, I rather expected the second act to be a present day story mirroring the fairy tale characters we had just been watching during the fitfully amusing but not exactly riveting first act. But no, the second act picks up on the action of the first, though there is at least a different sort of twist in store midway through.

Still, on the whole, the second act plays very well and I felt the handful of folks who walked out during intermission would likely have enjoyed themselves if they had stayed.

It helps that Beane has assembled a first rate cast of farceurs including Julie Halson, Jackie Hoffman, and Ann Harada.

The play is written mostly in verse, and there are some very clever turns of phrase, even if eventually all the rhyming couplets begin to wear..

The action is propelled by “Dream’s” Oberon (a dynamic Arnie Burton) and Titania (Halston) deciding to divorce because of the former’s serial philandering. But if they do, the Goddess of the Dawn (Kuhoo Verma) foretells that their daughters will all perish. These include Peaseblossom (an appealing Kristolyn Lloyd), Cobweb (Z Infante), Mustardseed (Ann Harada), and Moth (Jackie Hoffman) who bears some thematic similarities to Tinker Bell.

For her part, Titania is smitten with her handsome young Changeling (James Nanthakumar) in her charge. And before long, the now footloose Oberon encounters the frustrated Virgin Queen Elizabeth (also Halston).

Then there’s Gepetto (Mo Rocca, quite charming) constantly on the hunt for his delinquent creation Pinocchio (Sabatino Cruz). Cinderella (Verma) plays cat and mouse with her handsome Prince (witty Jason Tam who turns up as Cupid), while Sleeping Beauty (Infante) waits for love.

Peasebottom has a love/hate relationship with Puck (Chris Myers) who calls her “Fairycakes.”

And there’s Dirk Deadeye (Burton again), the name borrowed from Dick Deadeye in “H.M.S. Pinafore,” but actually one of the pirates from the “Peter Pan” story. He’s ever on the prowl for love which leads him from Moth to some surprising new territory. 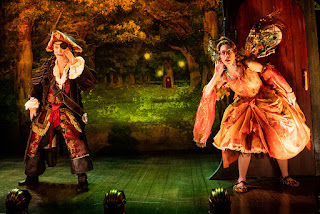 Eventually, all the players are put to sleep, as in “Dream,” to fall in love with the first person they see upon waking, and with predictably unlikely results.

Except for Hoffman and Myers, everyone else gets a double role, and contrasts them skillfully. Halston, with her willowy figure and peerless delivery, is especially fine, as even at her funniest, she always taps into emotional truth.

Tiresome though the antics grow after two hours, Gregory Gale’s costumes are a continual delight, and Shoko Kambara and Adam Crinson have done a commendable job of creating a campily enchanted forest on the smallish Greenwich House Theater stage. Lewis Flinn’s attractive music is another plus.

Print this post
Posted by Harry Forbes at 4:01 PM