The Visitor (The Public Theater) 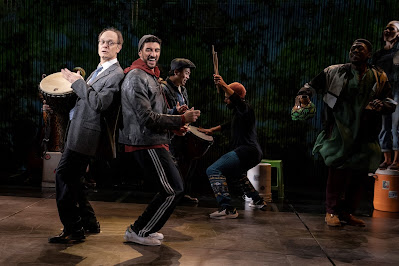 Thomas McCarthy’s 2007 film with an Oscar-nominated Richard Jenkins would seem an unlikely candidate for musicalization, though drumming (an African djembe, to be exact) does play a large literal and metaphorical part of the story so perhaps not so unlikely after all.

In any case, the story concerns a disaffected and widowed economics professor (here, David Hyde Pierce) who returns to his New York apartment to find a couple living there, Tarek (Ahmad Maksoud) an exuberant Syrian drummer, and Zainab (Alysha Deslorieux), a Sengalese jewelry maker with a defensive edge. They had been rented the apartment by a con. They offer profuse apology and vacate promptly, but Walter chases after them with a forgotten item, and ultimately invites them to stay.

Under the freewheeling influence of Tarek, Walter blossoms emotionally, even taking the first steps at drumming. But when Tarek is unjustly arrested for jumping a subway turnstile, Walter learns that he and Zainab are, in fact, illegal immigrants.

Energized by his young friend’s predicament, Walter does his best to help him. Meanwhile, Tarek’s mother Mouna (Jacqueline Antaramian) arrives unexpectedly from Michigan after not hearing from her son, Walter offers her Tarek’s room. Before long, a bond grows between them.

The cast is excellent, though Walter’s depressed character forces the always reliable Pierce into an overly low-keyed stance. And even though Walter takes on greater agency as the story progresses, the end result is still, a bit on the pallid side right through his eleven o’clock number, “Better Angels.”

Maksoud, who replaced Ari’el Stachel during previews when the latter allegedly departed over disagreement about how the material was being handled, gives a confident and extremely likable performance. Deslorieux is no less strong  as the more emotionally wounded girlfriend who carries an air of toughness. Antaramian is just lovely, both vocally and dramatically. 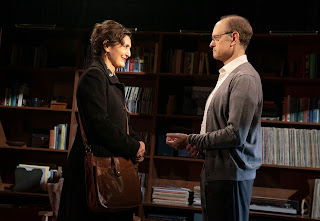 Brian Yorkey and Kwame Kwei-Armah have co-written the book which presumably has attempted to take into account the cultural changes of the last 14 years But that hasn’t stopped reviewers criticizing the show for being out of step with today’s woke sensibilities. Some are viewing the show as yet another “white savior” story which, in a sense,  it is, but I think the audience at my performance accepted the narrative in the positive way its authors intended, one which, in any case, is strongly sympathetic to the plight of immigrants, and angrily defiant about our government’s treatment of them.

And anyway, from a purely dramatic viewpoint, it’s Tarek, Zainab, and Mouna about whom we ultimately care the most. Walter’s midlife crisis is simply less interesting.

It’s always difficult to judge a score on first hearing. But I’d say even if some of it sounds generic in the usual Broadway pop opera way, there are also some very nice things in Tom Kitt’s score (lyrics by Yorkey): Mouna and Zainab’s ode to “Lady Liberty,” Tarek’s “Heart in Your Hands,” the duet “My Love is Free” by Tarek and Zainab, and “What Little I Can Do” for Walter and Mouna.

As usual these days, some of the more lively numbers sound overloaded in Jessica Paz and Sun Hee Kil’s co-sound design muddying the lyrics. Jamshied Sharifi’s orchestrations add flavorsome Middle Eastern or African ethnic flavoring where needed. I left the performance hoping the score might be preserved on CD.

It’s not a dance heavy show, but Lorin Latarro’s choreography is imaginative, from the coordinated movements of attendees at an NYU conference to the more extroverted numbers such as “Drum Circle” wherein Walter joins Tarek for a drumming session in Central Park, and later in “World Between Two Worlds” sung and danced by the angry detainees.

Daniel Sullivan directs the dramatic material well, and the story is so absorbing that it would work without any songs at all, but I do, upon reflection, think the music enhances the story.

It would be a shame if concerns about cultural appropriation and the like kept audiences away, because for all its alleged shortcomings, I felt “The Visitor”  was a genuine crowd pleaser, keeping the audience rapt and earning the strong applause and standing ovation it receives at the end.

Print this post
Posted by Harry Forbes at 8:28 AM