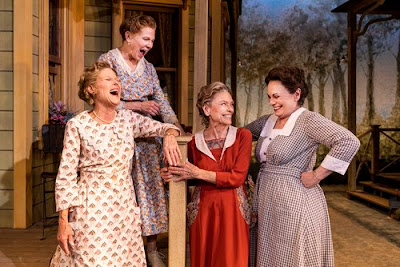 The revelatory 1980 revival of Paul Osborn’s 1939 charmer remains a cherished theatrical memory for those of us who saw it, and the play continued to demonstrate it had legs with yet another excellent Broadway mounting in 2002. Both of those revivals, in fact, ran far longer than the original which only lasted 44 performances.

And here it is again in a lovely Off-Broadway revival holding up as sturdily as ever.

Homer’s aunts, Cora (Lindsay Crouse) -- married to Thor (Dan Lauria) -- and the single Arry (Alley Mills), who clearly harbors deep feelings for Thor, live together in the house across the way.  A fourth sister Esther (Patty McCormack) is married to snobbish former professor David (Tony Roberts) who thinks the whole brood, with the singular exception of Carl, are “morons,” and discourages, or more accurately, forbids, his wife to visit her kin.

Carl holds the deed on the house across town which is promised to Homer if and when he decides to tie the knot with Myrtle. Cora, for her part, covets the house as it could mean a break from Arry. Therein lies the play’s principal conflict.

Carl’s perpetual musings on where he is in life, and how things might have been different had he taken a different direction in the “fork in the road” sums up the existential heart of the play which is deeper than it seems at first glance for all its gentle charms and homespun characters. All of them find themselves yearning for change: Cora, dreaming of a life alone with Thor; Arry, frustrated after a lifetime of being the third cog on the wheel, and Esty, beginning to hanker for freedom from her husband’s dictatorial thumb; and so on.

Like the two previous major New York revivals, this one has been beautifully cast across the board with everyone just perfect in their roles. Dan Wackerman brings out the best of all of them, and skillfully elucidates Osborn’s themes. Apart from the skill with which everyone handles their parts, there’s the added nostalgia value of fondly recalling so many of them in their earlier film and stage triumphs.

It’s unfair to single anyone out, as each so good, but Alley Mills deserves a special shout-out for so beautifully stepping in for the injured Judith Ivey during rehearsals, and creating a fine, touching character. 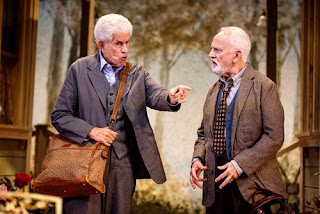 Harry Feiner’s two house set on the spacious St. Clement’s stage makes an attractive backdrop to the action. Barbara A. Bell’s costumes are period perfect, the period being 1922.

It’s a pleasure to experience such a beautifully constructed play, old-fashioned in the best sense. Osborn’s characters are sharply drawn, and though hardly action packed on the surface, the play’s action grips from start to finish. Another positive aspect of the work is the basic decency of all the characters, despite petty jealousies and strife. All of them are extremely identifiable too.

Though the 1980 revival was adapted for television by Showtime and PBS, it’s rather remarkable that a feature film was never made from a property which besides its New York stagings has had a robust life in stock and regional theater.

Print this post
Posted by Harry Forbes at 9:12 AM