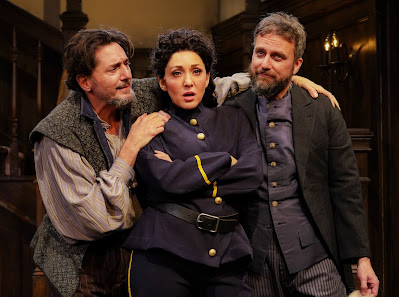 My last (and until now, only) encounter with Ben Jonson’s classic comedy came by way of Nicholas Hytner’s starry 2006 revival at London’s National Theatre. Its dazzling cast included Alex Jennings, Simon Russell Beale, Lesley Manville, and Ian Richardson, and it was smartly updated to modern times with some textual changes to reflect the new period.

Wonderful in nearly all respects as the production was (especially Jennings), I do remember chunks of Jonson’s text escaped comprehension by my 21st century ears..

That is decidedly not a problem with the current revival created by the same team that came up with the side-splitting adaptation of Gogol’s “The Government Inspector” in 2017: writer/adapter Jeffrey Hatcher and director Jesse Berger.

Samuel Coleridge declared “The Alchemist” to have one of the three most perfect plots ever constructed. Hatcher, in the program notes, tries to assure us that he has not fiddled drastically with that well oiled machine before admitting that he “did screw around with the plot...dumbing down the highbrow jokes...tossing in anachronisms,” and more. It is, in short, a slimmed down version with one scene instead of four, and fewer characters. But no matter, it is still, in Hatcher’s words, Jonson’s “style and spirit, if not his meter.”

Putting such purist matters aside, the result is very funny indeed, and indeed far more comprehensible than the more textually authentic National Theatre version. Is it, as several friends have inquired, as hilarious as “The Government Inspector”? I’d say no, but very nearly so. In any case, comparisons are irrelevant as this 1610 comedy is a far different world than Gogol’s.

As with the earlier production, Red Bull Theater has assembled a solid cast of accomplished comic actors who, no doubt, could do an equally fine job with Jonson's unadulterated original.

Despite the changes to the dialogue, and unlike the Hytner production, the period has not been altered, and plays out at a frenetic pace on Alexis Distler’s handsome set. The plot concerns the machinations of a wealthy man's servant, Face (Manoel Felciano), who joins forces with Subtle (Reg Rogers), the titular pretended alchemist, and Dol (Jennifer Sánchez), a prostitute in cahoots with the others two, who take over the master's house -- while he has gone to the country to escape the plague -- and bilk as many of the gullible characters as they can, promising they can turn base metal into gold, foretell the future, provide magic charms and so forth that their victims, only too motivated by greed, eagerly swallow, hook, line and sinker. 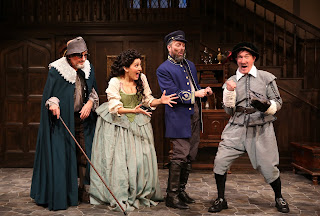 All skillfully create masterful comic portrayals, and Rogers and Felciano are particularly marvelous in their multiple impersonations.

Berger has staged the mayhem at a frenetic pace with doors opening and closing and farcical entrances and exits at every turn. Tilly Grimes’ costumes are richly designed and frequently witty.

Print this post
Posted by Harry Forbes at 8:53 AM