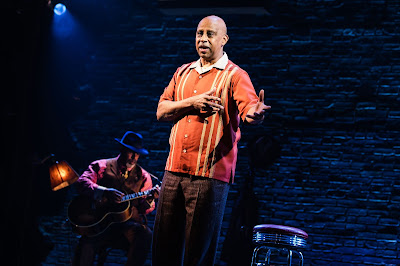 I had not previously seen Ruben Santiago-Hudson’s autobiographical one-man valentine to the extraordinary woman who raised him in the 1950s after he was abandoned by his mother. It debuted at the Public Theater in 2001, and became an all-star HBO film in 2005 garnering many awards. So I was very happy to experience the show -- and Santiago-Hudson’s virtuosic performance -- at last in its Broadway debut.

First and foremost, he offers a wonderfully sympathetic and lovable portrait of Rachel Crosby, the indomitable woman known as Nanny or Mother to the scores of people she helped in her Lackawanna, New York, boarding house and elsewhere around town. He also plays his wide-eyed innocent younger self, and all the colorful characters who populated his young world. There are several like Numb Finger Pete, Mr. Lucious, and Lemuel Taylor who are missing body parts (fingers, an arm, a leg), but nearly all are financially or emotionally handicapped. All are portrayed with great compassion and empathy. Occasionally he breaks character to give us uninflected narration.

There’s no shortage of humor -- one malaprop-inclined character refers amusingly  to “The Statue of Delivery” and a diagnosis of “the roaches of the liver” -- but the overall tone is movingly poignant, and never more so than when young Ruben comes to the realization that Nanny will one day die, or when that eventual inevitability comes to pass.

Effortlessly crossing age and gender lines, he’s as staggeringly chameleon in his many guises as the three multi-faceted stars I recently praised so effusively in “The Lehman Trilogy.” And the material is obviously deeply ingrained, much like Chazz Palminteri’s childhood memory play, “A Bronx Tale,” which, like “Lackawanna Blues,” went from solo show to successful multi-character film. Perhaps, like “A Bronx Tale,” Santiago-Hudson’s play may one day return as a musical.

In the meantime, there’s plenty of music here, as he moves with a dancer’s grace changing his body language as much as his vocal cadence and timbre. Casually outfitted by Karen Perry, he offers a dazzling tour de force, and plays a mean harmonica too. Joining him onstage is guitarist Junior Mack playing the evocative underscoring of Santiago-Hudson’s late longtime collaborator Bill Sims, Jr.

There are a remarkable number of characters to keep track of (at least 24 as cited in the program), but each is conveyed with remarkable clarity, though I will confess to being a little muddled a handful of times.

How astonished and touched the feisty, self-effacing Rachel Crosby would be to know that her life has been so movingly immortalized!

Print this post
Posted by Harry Forbes at 8:58 AM