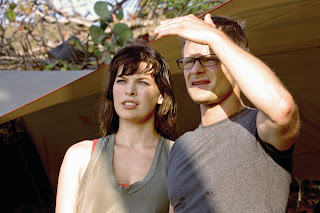 A honeymooning couple encounters all manner of peril on the lush Hawaiian island of Kauai in the ingeniously constructed and surprisingly effective thriller, “A Perfect Getaway.” Predictably formulaic at the start, the film finally proves itself anything but.

Unaware there’s a killer on the loose, and another pair of newlyweds has just been killed in Honolulu, shy, bespectacled screenwriter Cliff (Steve Zahn) egged on by enthusiastic bride Cydney (Milla Jovovich) fearlessly decide to forge through a tropical jungle to the beach.

Along the way, they encounter a scary hitchhiking couple (Chris Hemsworth and Marley Shelton), just barely avoiding giving them a lift. Soon after, they run into cocky Iraq war vet Nick (Timothy Olyphant) who becomes their impromptu guide, and casually entices them to venture away from the 11-mile trail to an Eden-like nook. (Most of the filming was actually done at Puerto Rico’s El Yunque national forest subbing for Na Pali Coast State Park.)

There Nick embraces his down home Southern girlfriend Gina (Kiele Sanchez), first seen lolling naked by the waterfall. Cliff and Cydney begin to have qualms about the friendly but oddball pair, especially when Cliff learns more of the recent murders from cell phone news bulletins. But the honeymooners can’t seem to shake off their new “friends.” Meanwhile, the hitchhikers reappear, adding to the sense of menace.

You just know something awful is going to happen, and indeed it does. But director David Twohy’s twisty script, as noted, skirts the predictable. What happens requires major suspension of disbelief – and a nagging wish to watch the film all over again and catch the inconsistencies – but, even so, what’s here is enjoyable for fans of this genre.

Though acting is generally secondary to action in these sorts of films, the performances are quite solid: Zahn and Jovovich, respectively befuddled and heedless of danger, with enthusiasm soon giving way to apprehension, and Olyphant and Sanchez walking the fine line between likability and possible menace.

Tautly directed by Twohy, you’re guaranteed to jump out of your seat more than once. Though it has all the markings of what used to be called a B-level programmer, this one’s a cut above.

(Rated R for graphic violence, language including sexual references and some drug use.) Print this post
Posted by Harry Forbes at 5:07 AM