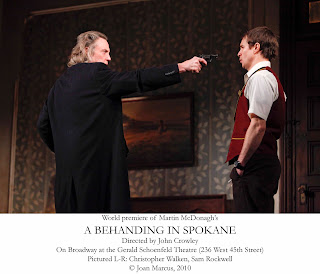 First, let it be said that Christopher Walken is a wonder from start to finish: quirky, eccentric, unpredictable, understated, and menacing. And that Sam Rockwell, Anthony Mackie, and Zoe Kazan, though not in Walken’s inspired league, are not exactly slouches either. This is a blue-chip cast.

But though my admiration for Martin McDonagh has, till now, been boundless, I’m sorry to report that “A Behanding in Spokane” falls considerably short of his best.

Walken is Carmichael, a wild-haired derelict who’s checked into a second-rate hotel. As a youngster, he lost his hand when hillbilly hoodlums held it under a roaring train, and then had the audacity to wave him goodbye with the disembodied appendage.

He has obsessively spent the intervening years trying to find it, even though he knows it would be useless to him.

A couple of pot-dealing con artists, Marilyn (Zoe Kazan) and Toby (Anthony Mackie) have sold him a shriveled black hand they claim is his. (They’ve actually stolen it from a museum.) He didn’t fall for the ruse, and they are now his prisoners.

Mervyn (Rockwell), the loony receptionist, comes up to investigate when Carmichael fires a gun, and thereafter continues to be a prying, obstinate presence, not particularly concerned about his safety. In fact, loner and outsider that he is, he wouldn’t be averse to a little excitement.

The problem with the work is that Marilyn and Toby – drawn as comically battling lovers – are dramatically implausible. When Toby, early on, attempts to leave the hotel on the ruse of returning with the “real” hand, the annoyingly clueless Marilyn gives him such grief about being left along with Carmichael, it prevents their chance to get help, the first of a string of improbable behavior from these two.

Carmichael ends up handcuffing the couple to the pipes and, while he goes off to find the putative real hand, sets a long-burning candle on a can of gasoline

A lengthy monologue for Mervyn, well performed by Rockwell, delivered in front of the curtain, vaudeville-style, is not particularly amusing, even as it conveys some necessary exposition about his character.

McDonagh’s dialogue bears his trademark style, and ultimately, a compassionate tone prevails, but his constant repetition of the f-word and its variants often seems a poor substitute for genuine wit.

Be warned that severed hands (of rubbery consistency) abound, but all in all, the violence in “Behanding” is mainly suggested.