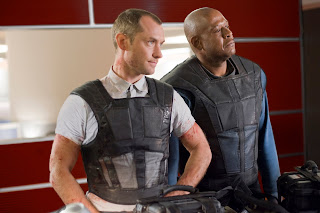 No, this is not a remake of the 1984 cult satire, but a frequently gruesome futuristic tale about repo men whose job it is to repossess artificial body organs when the owners can no longer pay their monthly installments. (Humans apparently buy these so-called artiforgs to stay youthful and vibrant, heedless of the dire consequences should they fall behind in payments.)

Remy (Jude Law) and his partner Jake (Forest Whitaker), a pal but also a bully, go where they’re assigned by chief Frank (Liev Schreiber, once again playing an obnoxious heavy) to rip out the hearts and livers or whatever from the hapless deadbeats. They take glee in their grisly task, though Remy’s wife Carol (Carice Van Houten) has become fed up with her husband’s repugnant profession. He’s to ask for a sales job instead, or else, she warns him.

When Remy is seriously injured on the job, and requires an artificial heart himself, he suddenly develops a conscience, and wants out of the game, but now he, too, is in debt to the “union” that dispenses the part. And, of course, it’s Jake who’s eventually assigned the job of tracking down his old buddy.

Meanwhile, Carol, their young son in tow, has left Remy, despite his moral turnaround, freeing Remy to join forces with fellow debtor Beth (Alice Braga), who’s got more artificial body parts than you can count, as they elude Jake and other union goons.

In this inauspicious setting, Law manages his usual good work. Whitaker’s loathsome, character becomes tiresome, though Eric Garcia and Garrett Lerner’s script – based on Garcia’s novel, “The Repossession Mambo” -- keeps you guessing about how loyal a friend he’ll be to Remy.

The production notes indicate that Garcia intended his story to be a comedy and that it gradually morphed into “darkly comic social commentary,” but you’ll search in vain for any laughs here, except perhaps for Remy and Beth’s particularly repellent love scene near the end, involving all manner of non-sexual body parts.

Miguel Sapochnik’s direction is not without visual flair, aided by David Sandefur’s production design. A climactic chase in a large white laboratory with technicians outfitted in white is a striking example. But some suspenseful moments like that one aside, the violence and gore are pretty unpleasant to endure, ranking high on the yuck scale.

(Rated R by the MPAA for strong bloody violence, grisly images, language and some sexuality/nudity.) Print this post
Posted by Harry Forbes at 7:48 AM