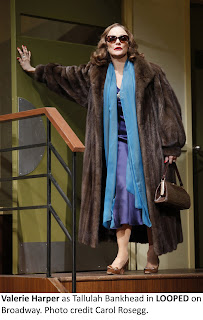 The flamboyantly theatrical Tallulah Bankhead with her legendary grand manner, affected speech, and self-promoting notoriety could not be further removed from the New York honk of Rhoda Morgenstern.

But Valerie Harper – who, of course, has time and again proven her versatility -- embodies the theatrical legend to a tee, and audiences will have to strain to catch even a trace of mannerism of her iconic TV character.

Imperious, willful, flamboyant exasperating, foul-mouthed, sexually voracious, irreverent and yes, even vulnerable, Harper captures the very essence of a lady known as much for her off-stage shenanigans as her stage and screen triumphs (“Rain,” “The Little Foxes,” “Lifeboat,” “Private Lives,” “The Skin of Our Teeth,” etc.).

Playwright Matthew Lombardo’s premise is, in essence, a clever one. When Bankhead shot what would be her last movie -- the luridly titled “Die, Die, My Darling” in 1965 – it was necessary to post-sync (or loop) some of her dialogue which had come out distorted on the soundtrack. Bankhead’s antics in the sound studio were the stuff of legend.

Lombardo has taken some dramatic license in making it just one line of dialogue that needs to be redone. Over two acts, while a hapless film editor Danny (Brian Hutchinson) and sound technician Steve (Michael Mulheren) pull out their hair, Bankhead takes her sweet time, repeatedly fumbles her one line, stopping to drink, reminisce, and play the temperamental diva.

The play, smoothly directed by Rob Ruggiero, is not unlike “Souvenir” – that two-hander about off-key soprano Florence Foster Jenkins and her pianist – in its essential structure: larger-than-life personality and (shall we say) less dominant male against which the former can play. (Steve, in this case, doesn’t count, as he’s in his booth the whole time.)

Though for a long time, Danny serves merely as Bankhead’s sounding board, he gets more to do in the second act when finally, under Bankhead’s relentless badgering, he opens up to her about his sad personal life (as if we really care). He’s not exactly likable, as written, though his grumpy frustration at Bankhead’s scattered ramblings and boozing is certainly justified.

Though Bankhead’s image takes quite a drubbing (and much is made of her disastrous turn as Blanche DuBois), homage is eventually duly paid to Bankhead’s true glory days lest anyone exit the Lyceum thinking her whole career was a joke, and we learn she’s a good old gal underneath it all.

Many of the Bankhead’s outrageous witticisms and oft-told anecdotes about her are incorporated throughout, but Lombardo weaves them into an organic whole. The campy result is paper thin, but it proves an entertaining vehicle for powerhouse Harper, whose performance will be enjoyed even by those who have never heard of the actress she’s playing so vividly.