The Miracle Worker (Circle in the Square) 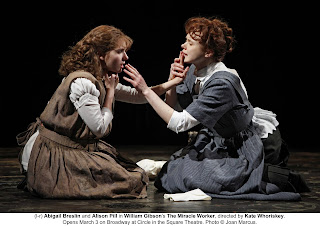 Some reviews have been unaccountably lukewarm, but this is, in fact, a solid revival of William Gibson’s surefire audience pleaser about young Helen Keller’s extraordinary relationship with Annie Sullivan who, incredibly, taught the girl – blind and deaf after a fever in infancy – how to communicate, and understand the meaning of words.

Alison Pill as Sullivan and Abigail Breslin as Keller are first-rate in roles immortalized by Anne Bancroft and Patty Duke, both on stage and screen. Though they don’t erase memories of their predecessors’ performances, Pill and Breslin are so good you’re never tempted to make odious comparisons.

The setting is 1880s Alabama. Helen has been an unruly wild child spoiled by her doting parents (Matthew Modine and Jennifer Morrison) and aunt (Elizabeth Franz).

Annie is sent by the Perkins Institute for the Blind to help tame and teach her. She is a mere 20 years old, was once blind herself, and was raised in an asylum with a young brother who died, and whose memory continues to haunt her. (The boy, seen in flashbacks, is played quite effectively by Lance Chantiles-Wertz.)

Unable to exert the proper influence on Helen especially after a tremendous display of violent willfulness at the dinner table, Annie begs the Kellers for two weeks alone with the girl in their abandoned cabin to be able to teach her in an environment free of their well-meaning interference.

Director Kate Whorisky, last represented by the powerful “Ruined,” does full justice to the physicality of the play, particularly those dinner scenes where the food and silverware really fly. (Kudos, incidentally, to movement coach Lee Sher.)

Film star Breslin makes an auspicious stage debut, fully inhabiting the role – whimpers and primal screams her only dialogue – and Pill is completely convincing as a sturdy, almost brittle, New Englander with no compunctions about going head to head, when she must, with the blustery, Civil War veteran Captain Keller (an excellent Modine).

The bond between pupil and mentor – one that would, in fact, last well beyond the events depicted here – is touchingly conveyed in the interaction between Pill and Breslin.

The final, famous scene – Helen at the water pump – is one of the most moving in Western drama, and is most beautifully staged here.

The in-the-round staging makes for some distancing, depending on one’s seat location. Derek McLane’s settings rise and fall as needed, sometimes distractingly so, with Kenneth Posner’s sensitive lighting providing further definition of time and place.

Despite a child at its centerpiece, the conflicts and emotions of this family drama are powerfully adult. There were nonetheless quite a few young people at my performance, and they were silently riveted throughout, a remarkable achievement, and a testament to Gibson’s power as a dramatist and the truly wondrous story that inspired him.