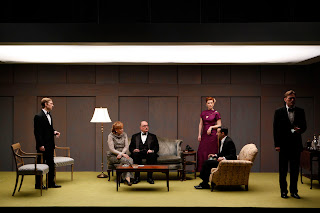 T.S. Eliot’s most accessible play has been given a rare mounting courtesy of the enterprising Actors Company Theatre (TACT). Their production demonstrates why the unusual, thought-provoking piece – written in verse, though you’d never know it -- enjoyed a lengthy Broadway run, and won the Best Play Tony Award in 1950.

On this occasion, Scott Alan Evans directs a solid cast led by Simon Jones in the role created by Alec Guinness, first at the 1949 Edinburgh Festival and then on Broadway, and later by Rex Harrison in London. It was this role that cemented Guinness' reputation with American audiences. The part is the “Uninvited Guest,” a mysterious character who shows up at the titular gathering, eventually shedding profound light on the lives of the others.

Edward’s wife Lavinia (Erika Rolfsrud) is curiously absent, and no one believes Edward’s flimsy excuse about her visiting a sick aunt. In fact, she has left him. He has been carrying on an affair with Celia, who now views Lavinia’s absence as their chance for happiness. Despite his loveless five-year marriage, Edward – feeling old and indecisive -- still wants her back for reasons he can barely articulate. Celia feels humiliated.

When the others have gone, though, the stranger reveals that Lavinia can come back provided no questions are asked.

In the second act, we learn the identity of the guest. He’s Sir Henry Harcourt-Reilly, a psychiatrist, and he has summoned Edward and Lavinia for counseling, without informing either of them in advance. The tone has suddenly shifted to a serious one involving moral and spiritual choices, and ruminations on the human condition. The doctor speaks of “faith that issues from despair” and “suffering on the way to illumination.”

There are supernatural overtones, and one character comes to choose a radical life-altering course that actually results in that character finding salvation through martyrdom (i.e. a literal crucifixion).

Christian symbolism, in fact, abounds. When the play was first done, it was greatly talked about and its meaning much debated. (Eliot himself remained mum.) Present-day audiences may find some of the the portentous talk somewhat heavy going, and the “meaning” not so terribly mystifying after all. Decades ago, critic Kenneth Tynan found the symbolism “painfully simple.”

Among Eliot’s themes are psychiatry, then in vogue, and the emptiness of people’s lives. Characters complain of isolation and loneliness (“one is always alone,” one remarks), and that they can’t love or be loved.

Jones strikes the right tone as the enigmatic guest, and morphs convincingly into the authoritative and decisive character of the second act. English is appropriately worldly in the party scenes, and limns her extraordinary turnabout in the doctor’s office most movingly.

But the cast is excellent all around. Alhadeff is highly amusing as he insists on improvising a meal with limited ingredients for the abandoned Edward, and Harris provides ongoing comic relief as she chatters on about this or that.

Whether comedy (as labeled by Eliot), social commentary, or religious tract, this is a meaty work that makes you think. And TACT’s fine production should help remind today’s audiences there’s much more to T.S. Eliot than his posthumous, unintended stage-success “Cats.”