All About Me (Henry Miller’s Theatre) 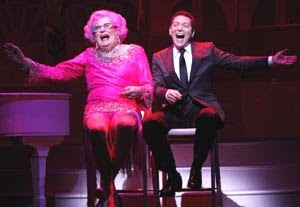 If Dame Edna and Michael Feinstein are not exactly a match made in heaven, they go into this with eyes wide open. And they’re nothing if not savvy pros. Edna – aka Aussie comedian Barry Humphries – for his/her part, certainly has plenty of experience working with the most disparate of performers on his various Edna television series.

Written by Humphries and Christopher Durang (conceived by Humphries with Lizzie Spender and Terrence Flannery), this offbeat pairing, though sometimes effortful, ultimately comes off, and provides the requisite entertainment value.

After a teasing overture, with snippets of iconic Broadway musicals, the show opens with Feinstein in atypical, brassy, Vegas mode belting “Strike up the Band,” followed by several others including a more characteristic “My Romance,” his voice slightly husky. Before long, he’s interrupted by Edna, glitteringly gowned by Stephen Adnitt, atop set designer Anna Louizos’ staircase, insisting that the “Me” of the title refers to her.

The monologue that follows has the iconic character’s usual satiric jibes against celebrities, in this case Liza Minnelli, Susan Boyle, Neil Patrick Harris, Madonna, Ruth Madoff -- Edna’s renamed the paupers in the balcony as “friends of Bernie” who have now fallen on hard times -- and two hapless ladies in the orchestra – on this occasion, one Margaret and Thelma -- who probably regretted sitting as close as they did.

It eventually takes a butch stage manager (Jodi Capeless) to mediate, and declare that the evening will henceforth be shared. After a costume change for the stars, during which Capeless surprises us by belting out a Kander & Ebb number), there’s a one-minute-each face-off giving way to the pair agreeing to don an act of standards, koala bears, medleys, and dramatic songs.

And indeed they do. Feinstein gets to deliver “A Lot of Livin’ to Do,” and “What Did I Have That I Don’t Have?” Edna reprises “The Ladies Who Lunch” -- which she did at a Sondheim benefit in London over a decade ago -- with surprising effectiveness even after previously declaring a “Sondheim-free zone.” Her excuse? She doesn’t believe “little Stevie” wrote it. “Too catchy,” she quips.

Medleys and duets follow, under Casey Nicholaw’s light-hearted direction. Edna’s falsetto squawk blends surprisingly well with Feinstein’s in the mostly comic numbers, and after all, Humphries is, of course, no stranger to musicals, originating roles in Lionel Bart’s “Oliver!” and “Maggie May.”

Somewhere in there is a pair of dancing koala bears played by dancers Gregory Butler and Jon-Paul Mateo who appear throughout the evening in various supporting guises.

Edna has an especially amusing piece of special material, sung in tribute to Meryl Streep a la Helen Morgan, atop the piano “The Dingo Ate My Baby.”

Feinstein and Humphries wrote several of the jolly original songs, either solo or in collaboration, while other hands are credited with others.

They may indeed be “oil and water,” as one of their lyrics goes, wickedly rhyming the phrase with “Alec Baldwin and his daughter” but Barry Humphries is one of the truly outstanding satirists of our time, a great performer and a true Renaissance man, and Feinstein one of our finest interpreters of the Great American Songbook, so we can overlook those moments when their personas don’t really gel.

This may not be high art – though the brilliance of Humphries’ wit and the interpretive skill that Feinstein brings to several of the songs here – do indeed fit the definition. But viewed as a sort of 21st century vaudeville, it’s a lot of fun, and what’s wrong with that?

Gladiolas – a Dame Edna trademark – are strewn fairly liberally by show’s end, and the standing ovation at the end – though coaxed by the stars -- is, in fact, authentically earned.

But hurry, the show has, alas, posted a closing notice of April 4.