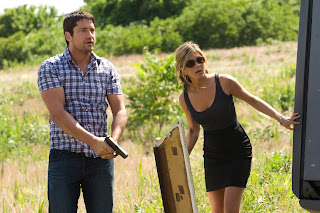 Jennifer Aniston and Gerard Butler may not be the Jean Arthur and Cary Grant of our time, thinking back to one memorable Hollywood pairing, but they are both pros, and in their first film together, reveal appealing chemistry, even if they’re at loggerheads throughout.

Butler is Milo Boyd, an ex-NYPD-cop-turned-bounty-hunter who will get $5,000 if he tracks down his ex wife, Nicole (that’s Aniston), a reporter for the “Daily News” who’s jumped bail.

She’s been investigating a suspicious suicide that points towards corruption within the NYPD; he’s an inveterate gambler who owes money to a tough lady bookie (Cathy Moriarty). The bad guys are out to silence Nicole; the bookie’s gang is on the trail of Milo.

Milo apprehends Nicole early on, and en route to his bringing her in, they find themselves on a journey that takes them from the streets of New York to the Atlantic City boardwalk and points in between.

Mixed up in all this is Stewart (Jason Sudeikis), a nebbishy reporter from Nicole’s paper who has a crush on her, and a sadsack informant Jimmy (Adam Rose). The former finds himself apprehended by the bookies (mistaking him for Milo), the latter by Nicole’s vicious pursuers.

Aniston – looking quite smashing in the short black dress she wears for most of the film – is, in particular, quite an accomplished comedienne and savvy film actress. Because – like so many stars – she seems to be playing variations of herself, it’s easy not to appreciate the solid craft and many subtle touches she brings to every scene. There’s an honesty about her delivery that makes her especially sympathetic, and she has that ability to telegraph her thoughts even when not speaking.

Butler continues to prove himself a highly versatile leading man, even if his character here is only a slight variation on his turn in “The Ugly Truth,” that is, an unfeeling slob who turns out to be (surprise!) a likable, sensitive guy.

The action-dominated film takes a break for a long romantic interlude where the pair takes shelter at their honeymoon lodge and begin to connect again.

The script could be wittier, and the action elements cleverer and more plausible, but it serves to let the two stars strut their stuff, and as Nicole and Milo bond as they did during their married days, the relationship plays out convincingly. Christine Baranski is a hoot as Nicole’s randy burlesque queen mother.

Andy Tennant directs the disparate action, comedy, and romantic elements capably. Guys will be relieved that there’s at least as much in the way of action as romance.

(Rated PG-13 by the MPAA for sexual content including suggestive comments, language and some violence.) Print this post
Posted by Harry Forbes at 8:24 AM