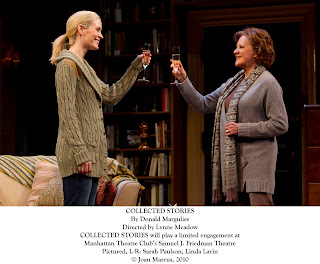 The role of Ruth Steiner has been good for Linda Lavin. She played the part in Gil Cates’ production at the Geffen Playhouse in Los Angeles nearly a decade ago, and recreated it as part of PBS inaugural presentation of its short-lived series “PBS Hollywood Presents” in 2002 playing opposite her Geffen co-star Samantha Mathis.

The role of the esteemed author and her protégé, an aspiring writer who becomes her personal assistant – a not-quite “All About Eve” dynamic – still fits her beautifully. Sardonically humorous, supremely self-assured, ever watchful of encroachment on her turf, she takes the unconfident, and adoring student under wing, and throughout the course of the play’s six scenes, the tables turn, Lisa finding success for her own stories, less needful of the older woman’s advice and approval, and Ruth – becoming more mindful of her own mortality -- becoming dependent on Lisa’s feedback herself.

But before that, genuine affection grows between the idolatrous Lisa and the till-then happily independent Ruth, something of a mother-daughter relationship, with Ruth seeing her younger self in Lisa. But a sort of professional rivalry, and ultimately, an enormous betrayal, mar the bond, when Ruth makes the mistake of confiding a long-ago affair (in the 1950’s) with the great poet Delmore Schwartz. It happens that in real life he was an alcoholic and a womanizer, so this fictional romance is entirely plausible.

After exhausting her own journals, Lisa feels she’s run out of material from her own limited life, and needs to expand her scope. Ruth’s rich back story provides the perfect fodder.

It is here that Margulies also grapples with the issue of authorship. Do we really own the rights to our own life stories? And when is the appropriate time for us – or for others – to tell them? Margulies has said that author David Leavitt’s much publicized appropriation of Stephen Spender’s life as an inspiration. In any case, he convincingly shows us both sides of the argument.

Lavin’s portrayal has, if anything, deepened over the intervening years, and having watched the PBS version again recently, I’d say her fine 2002 performance now seems a work in progress for the even more richly detailed performance she gives here, allowing for the fact that her performance was scaled down for the small screen, and the text itself discreetly trimmed (“less discursive,” Marguilies said at the time).

Sarah Paulson matches Lavin every step of the way, playing Lisa for the most part sympathetically, but evincing more than a little ambition and, in her way, behaving as shrewdly as Ruth. She also makes you genuinely believe in her character’s passion for writing. In fact, both ladies seem to truly “be” the characters they’re playing, not merely acting.