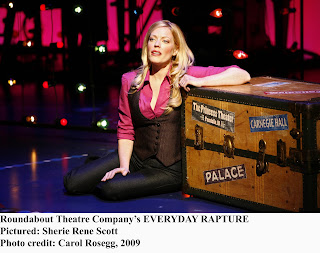 I didn’t see “Everyday Rapture” in its Off-Broadway run at Second Stage Theatre, but Sherie Rene Scott’s well-received semi-autobiographical mini-musical fits the large stage of the American Airlines Theatre well enough from a physical viewpoint. (The show was a hasty substitute for the cancelled revival of Terrence McNally’s “Lips Together, Teeth Apart.”)

Her script co-written by Dick Scalan, Scott begins with tales of her Mennonite upbringing in Topeka, Kansas where she found herself torn between “two lovers”: Jesus (via her heavily religious background) and Judy (as in Garland) whose songs proved highly influential. These two idols converge when she sings Garland’s “You Made Me Love You” against a succession of highly florid pictures of Jesus.

Her third idol was, of all people, Fred Rogers (of the PBS neighborhood that bears his name), whose uncontroversial message of love and tolerance turned out not to sit well with certain of her fundamentalist friends from back home.

It was her gay cousin Jerome – who would die of AIDS – who helped set her on a path that would lead her away Rev. Fred Phelps' Baptist Church and the intolerance around her, to the Big Apple where she had an unhappy fling with a magician (providing an opportunity for some onstage magic here), and eventually, a series of choice secondary roles in big musicals. Well, “Dirty Rotten Scoundrels,” “Aida,” and “The Little Mermaid,” are not exactly chopped liver, but Scott’s self-deprecating stance as a “semi-star” is a huge part of her charm.

With an eclectic assortment of songs – mostly of the non-show tune variety by the likes of David Byrne, Roberta Flack, The Supremes, Elton John, Tom Waits, U2 and yes, Mister Rogers – Scott charts not a typical showbiz-ladder narrative, but more of a spiritual journey, as she mulls the contradictory scraps of paper she says she keeps in each pocket: "I am a speck of dust" on one, "The world was created for me" on the other. She ultimately comes to a middle-ground ideal.

A discourse involving a four-leaf clover, her young son, and the family cat, takes on surprising profundity as a life lesson, without being at all heavy-handed.

The most overtly theatrical portion of the show involves a rabid internet groupie (the very funny Eamon Foley) whom Scott compassionately attempts to engage in an email exchange, much to her ultimate chagrin, as her ego takes a good battering.

Though in essence, this is a one-woman show, she is, in fact, backed by Lindsay Mendez and Betsy Wolfe – the Mennonettes – as her semi-fictional character morphs from insecure small-town gal to confident Broadway belter.

Against Christine Jones’ astral backdrop, lit by Kevin Adams, the show is sharply directed by Michael Mayer who demonstrates he can do intimate as well as spectacular (the latter evidenced by this season’s “American Idiot”). That Green Day show’s arranger, Tom Kitt, has skillfully performed like duty here.

All the technical aspects are fine, though surprisingly I found not every word ideally clear in either the songs or the spoken portions.

Scott is so talented and likable that you follow her 90-minute journey with intense sympathy, even as the material – original and often very clever as it is – doesn’t quite seem Broadway material. There’s no question, however, that the lady herself most certainly does.