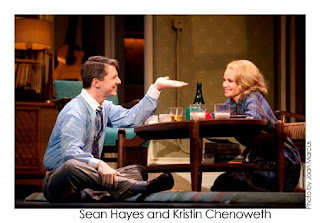 Sean Hayes didn’t make it to Broadway two years ago after Encores mounted its delightful, and eminently worthy, summer revival of “Damn Yankees,” playing the diabolical Applegate. Critics received it coolly, and a hoped-for transfer never came about.

But he’s back, having traded Applegate’s red socks for the corporate duds of a Manhattan insurance company, and he’s even more winning as an ambitious nebbishy junior executive courting favor with his superiors by reluctantly lending them the key to his apartment for adulterous trysts, while he harbors a crush on the demure executive dining room waitress Fran Kubelik played with low-keyed charm by Kristin Chenoweth.

If you know the property, or the Billy Wilder classic, “The Apartment,” upon which the musical is based, you’ll remember that in short order, Chuck learns that the innocent looking Fran is, in fact, romantically involved with the oily (and very much married) head of personnel J.D. Sheldrake (a solid Tony Goldwyn).

This production transposes the time period from 1968 (when “Promises, Promises” was first done) to 1962, presumably to curry favor with “Mad Men” fans, and perhaps make the sexual shenanigans more palatable, though there’s still a genuine (if intentional) sordidness to the premise. Still, with “The Apartment” set in 1960, the time shift is not implausible.

Burt Bacharach and Hal David’s score – orchestrated, like the original, by Jonathan Tunick -- bubbles as brightly as ever. This was a contemporary pop sound quite unlike anything heard in musicals before and, since they never wrote another book musical, since. Under music director Phil Reno, the score still sounds fresh. (A 2003 Broadway anthology of Bacharach-David songs, “The Look of Love,” was deservedly short-lived.)

Director Rob Ashford had the unenviable task of emulating Michael Bennett’s choreography and transitional movement, and has done an excellent job. The dancers are terrific, cartwheeling across the office, flipping over desks, and leap-frogging over each other with deft precision.

Chenoweth has been given two Bacharach-David evergreens to beef up her smallish and largely passive role: “I Say a Little Prayer” and “A House is Not a Home.” They are, of course, utterly gratuitous but don’t mar the whole, especially as she sings them so well. Each garners a big hand.

In contrast to her high-flying soprano, Chenoweth here uses her pop voice which can sound a little steely at times, but on the whole, she sings with sensitivity and understanding of the period style, being particularly effective in the quiet numbers. Of course, good as Chenoweth is, I’ll always hear originator Jill O’Hara’s distinctively adorable voice in my ear.

Like the role’s originator Marion Mercer and the 1998 Encores revival’s Christine Baranski, Katie Finneran very nearly steals the show as a soused barfly Chuck encounters at a divey bar. Finneran makes every line count as she drunkenly insists she’s no mere “pick-up,” meanwhile sending out every sort of signal to the contrary.

Neil Simon’s book really soars here, and indeed throughout is an expert distillation of Wilder and I.A.L. Diamond’s original movie script. It’s fun to hear many of the period New York references that remain: Cinemas 1 and 2, Brentano’s (book store), the boat to Bear Mountain, and the Late Show, to name a few.

Also delivering a gem of a comic portrayal is Dick Latessa as the kindly doctor next door who ministers to Fran when she overdoses on Chuck’s sleeping pills.

As noted, there’s strong support from Goldwyn who does well with his big solo, “Wanting Things.” And the four executives who use Chuck’s pad are especially well cast with Brooks Ashmanskas, Sean Martin Hingston, Peter Benson, and Ken Land.

Wearing his directing hat, Ashford scores with both the comic and dramatic scenes. This “Promises, Promises” is exceptionally well acted, and the denouement is quite touching.

Scott Task and Bruce Task on set and costumes respectively capture the era with period-perfect cheery colors, all brightly lit by Donald Holder.