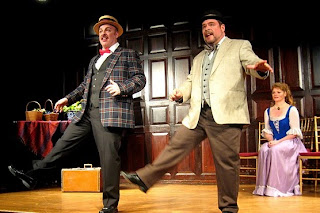 Light Opera of New York concluded its three-part Victor Herbert season with “The Red Mill,” a work that veers closer to musical comedy than the operetta genre which dominated the composer’s vast output.

The script, as with the series’ first two productions (“Mlle. Modiste” and “Naughty Marietta”), was altered, and characters (like innkeeper Willem and his daughter Tina) and songs ( “A Widow Has Ways,” “Good-a-bye John”) were dropped. But adapter Alyce Mott did her job tastefully (an intentionally anachronistic use of “road rage” notwithstanding), and the merits of the original shone through, with LOONY overall giving a good account of the piece.

The single narrator device was this time was here divided among cast members which, all in all, made for smoother continuity.

The extravagantly tuneful score (one of Herbert’s most popular) – “compiled” by Little Orchestra Society maestro Dino Anagnost – was, more or less, the same edition Anagnost used at Alice Tully Hall a few seasons back, and it was nicely played, albeit with more modest resources on this occasion, by music director Stephen Vasta and the Ambience Strings.

The small vocal ensemble (four men, four women) sounded crisp and well drilled, and made the concerted numbers – like the opening chorus of artists and models – especially pleasurable.

The soloists were uniformly strong. Elizabeth Hillebrand had presence and charm as the soubrette Gretchen. Tenor Matthew Hughes matched her vocally with his sweet tenor as her love interest Captain Van Damm. But the romantic aspects of the pair took second place to comedy.

As Gretchen’s aunt, the widow Berta, Jane Brendler Bűchi was a decided asset, even if far too young and attractive to be the sister of the crotchety old Burgomaster (well played by William Tost).

Kevin Murray and Peter Bűchi had what were originally the show’s star parts, Con Kidder and Kid Connor, the American duo who ultimately save the day. These were the roles originated by the team of Montgomery and Stone in 1906. But Murray and Bűchi did well, albeit shorn of most of the comic shtick of their predecessors, save their impersonations of Sherlock Holmes and Dr. Watson.

The reliable Richard Holmes livened up proceedings with the second act showstopper, “Every Day is Ladies Day with Me,” delivering a satisfyingly rich-voiced rendition, after which he blended most attractively with Ms. Bűchi in the lovely “Because You’re You.”

Other roles were taken by an extravagantly over-the-top Leslie Middlebrook as a French speaking dowager, Brian Wagner as the shifty sheriff with his eyes on Berta, and Lee Moore as a British solicitor who delivers a surprising revelation at the eleventh hour.

Gary Slavin directed and choreographed the cast resourcefully and staged the peppy numbers, “Go While the Goin’ is Good” and “You Never Can Tell About a Woman” with appropriate vaudevillian swagger.

Next season, LOONY has an especially ambitious program, the post-Herbert Romberg and Friml biggies, “The Desert Song,” “The Vagabond King,” and “The Student Prince.” If the company can maintain the high standards of this first full season -- and find three physically dashing, vocally solid, and charismatic leading men for the star parts -- the season should be a knockout.