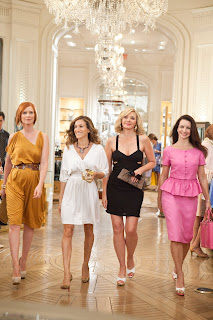 The franchise – and sorry to say, the gals themselves – may be aging (a point not ignored by the script), but all in all, the second big screen version is enjoyable if over bloated, if you can overlook the strained contrivance of the plot. Critics have been viciously snarky about the film, but fans will overlook the faults. It’s a totally unreal but eye-filling wish-fulfillment epic, and delivers the goods.

It’s two years since the events in the last film. Carrie (Sarah Jessica Parker) and Mr. Big (Chris Noth) have settled into a pleasant but tired domesticity. Carrie still wants to go out on the town, while Big is content to lounge in bed watching old black and white movies. (“It Happened One Night” gets significant play here.) They begin to think they could use a couple of days off from each other each week.

Perfectionist Charlotte (Kristin Davis), still happily married to Harry (Evan Handler), has two perennially crying girls, and after her friends lay seeds of doubt, has started to worry about her buxom Irish nanny Erin, played by Alice Eve (“Erin-Go-Bra-Less,” someone dubs her).

Miranda (Cynthia Nixon) is content with her once-erring husband Steve (David Eigenberg) and child, but at work where she’s senior partner at a law firm, she’s dissed by the chauvinist boss.

As for Samantha (Kim Cattrall), she is single-mindedly obsessed with warding off menopause, and keeping her insatiable sex drive intact.

When her PR skills impress a sheik (Art Malik) at the movie premiere of old flame Smith Jerrod (Jason Lewis), she’s offered an all-expense-paid trip to his luxurious hotel in Abu Dhabi (actually Marrakech). Samantha grabs this as the perfect opportunity for the girls to take a break from domesticity and have a dream vacation, Miranda enthusiastically playing guide.

The film strains to have it both ways about its exotic setting. This is as glamorous a portrayal of the Mideast since “Lawrence of Arabia” though you’ll guess that the foursome’s feminism will eventually clash with the repression of women in that Muslim society.

No sooner have they arrived than Carrie meets her old flame Aidan Shaw (John Corbett) which ultimately brings her a crisis of conscience, and Samantha gets the hots for a Danish architect (Max Ryan), running seriously afoul of local customs.

The situation is, of course, improbable, but the characterizations and the relationships between the foursome are as we remember. After a labored start, director-writer Michael Patrick King’s script emerges as generally savvy and amusing, and at least, given all the onscreen profligacy, makes passing reference to the wretched economy. The story, this time around, plays with themes of commitment versus infidelity.

This is laid out in the opening set-piece, the lavish wedding of Carrie’s friends Stanford (Willie Garson) and Anthony (Mario Cantone). Anthony informs Carrie that he and Stanford have agreed on an open marriage, an arrangement that perturbs our three married heroines. This being a gay wedding, the nuptials are officiated by (of all people) Liza Minnelli who, in surprisingly agile form, performs “All the Single Ladies,” for the guests.

There are further cameos by Penelope Cruz and Miley Cyrus. And show buffs will pick out several Broadway names among the roster, including Norm Lewis, Billy Stritch, Kelli O’Hara, Max Von Essen, and Matthew Risch.

Jeremy Conway’s lush production design – the exotic setting, the sumptuous accouterments (from the deluxe airbus, with its private suites for each passenger, and the four luxury sedans which escort the ladies to the hotel) – and John Thomas’ crisp photography are plusses.

The film is smartly constructed to appeal to the fan base, and Samantha’s escapades notwithstanding, comes out on the side of fidelity and true love, though the feel-good ending here doesn’t quite match the touching uplift of the last film.

(Rated R by the MPAA for some strong sexual content and language.) Print this post
Posted by Harry Forbes at 8:11 AM