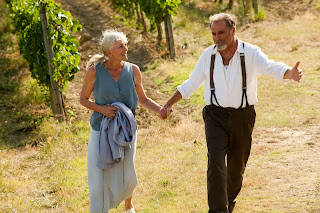 It is incredibly moving to see Vanessa Redgrave and Franco Nero reunited on screen 43 years after burning up the screen in the underrated film version of “Camelot” in which they played Guinevere and Lancelot.

“Letters to Juliet” could not, in fact, be a better showcase for them at this time of life. Redgrave is a British dowager who seeks to reunite with the handsome Italian farm worker she met while an art student there 50 years before. Before their planned elopement, she lost her nerve and now, widowed, she’s searching for him throughout the region, her disapproving grandson Charlie (Christopher Egan) in tow.

The catalyst for all this is Sophie (played by the seemingly ubiquitous Amanda Seyfried). She’s a fact-checker for The New Yorker with journalist aspirations, and has come to Verona for a pre-honeymoon with her hyper and self-absorbed chef fiancé Victor (Gael Garcia Bernal), who is more interested in checking out the local vineyards than spending time with his intended.

While sightseeing on her own at “Juliet’s Courtyard,” Sophie is intrigued by the scores of women leaving love notes for Juliet on the wall beneath her balcony, and at the end of the day, she observes the notes being carefully removed from the wall, and gathered in a basket.

It seems all the letters are dutifully answered by a colorful group of Italian volunteer women. Sophie joins them while Victor is otherwise engaged, and soon comes across a decades-old letter tucked deep into the wall; it’s young Claire asking for advice on the impending elopement. Sophie answers the letter, prompting Claire’s visit.

The bulk of the film has Claire, Charlie, and Sophie combing the countryside, tracking down numerous Lorenzo’s of every stripe (even a priest!) before, at long last, discovering the real one.

Though the succession of wrong Lorenzo’s becomes a little, well, repetitious, the payoff – when Redgrave and Nero finally come face to face – is all the more effective. It’s quite a heart-stopping moment.

Of course, there’s added resonance and poignancy in knowing about Nero and Redgrave’s offscreen “Camelot” romance which resulted in a son, Carlo Nero (now a film director), and their reuniting later in life, finally marrying in 2006.

Jose Rivera and Tim Sullivan’s script might have made Victor a little less patently self-absorbed, and Charlie’s transformation from stuffy twit to sympathetic good-guy is terrible sudden. So, too, there’s a final scene for Sophie and Victor that would have been best left out. It’s clunky, disrupts the romantic flow, and shows neither character in the best light. But otherwise, I was happy to succumb to the story’s romantic charm.

Though Redgrave has played many more serious roles, she has never been more luminous here. It’s just a lovely performance full of warmth and palpable maternal caring for both her grandson and Claire.

Seyfried makes a highly watchable dewy-eyed heroine, and Egan makes a likable leading man once he abjures his priggish ways.

It must be said that the warm-hearted Italian correspondents – Luisa Raneri and Luisa DeSantis among them -- are extremely well cast and make a delightful group.

From the artful opening credit sequence of lovers over the centuries, the film looks smashing, courtesy of production designer Stuart Wurtzel and director of photography Marco Pontecorvo. The scenery is absolutely breathtaking, and clearly, the movie will appeal to those who loved “Enchanted April,” “Under the Tuscan Sun,” and films of that ilk.

Predictability and some script deficiencies aside, this is a touching romance that transcends the chick flick genre.

(Rated PG by the MPAA or brief rude behavior, some language and incidental smoking.) Print this post
Posted by Harry Forbes at 8:53 AM