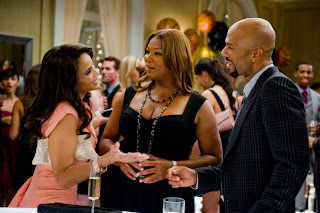 “Just Wright” is so predictable there’s nary a line of dialogue you won’t anticipate before it’s uttered, and yet it is all so pleasantly agreeable, the film – mild entertainment at best -- is difficult to dislike.

It helps to have the immensely empathetic Queen Latifah as your lead. She plays Leslie Wright, a physical therapist, 35 and single, living with her parents and her glamorous “god-sister” Morgan (Paula Patton, the kindly teacher from “Precious”) who attracts all the guys, while Leslie consoles herself with her work and her rabid passion for basketball.

Leslie’s blind dates never work out; they take her for a “home girl,” and just want to be “friends.”

Morgan is hell-bent on snaring a basketball star so she can live high on the hog as an NBA wife. After a game, Leslie meets New Jersey Nets star player Scott McKnight (Common) at a gas station, and they take an instant liking to each other. He invites her to his birthday party that weekend.

Leslie falls for him, but good sport that she is, takes Morgan along. No sooner do Scott and Leslie begin to hit it off that Morgan disingenuously breaks in and bats her eyes at Scott. The self-deprecating Leslie feels unworthy of Scott’s attention, and more or less abdicates to Morgan. Before long, Scott and the materialistic Morgan are engaged, but when Scott suffers a serious torn ligament on the court, guess who becomes his therapist? And when it looks like he may never recover, guess who dumps him?

Leslie nurses him back to health, and then Morgan…well, you can guess the rest.

The formulaic script (by Michael Elliot) is short on genuine laughs, and seems so concerned with everyone being decent and civilized that there’s virtually no dramatic conflict at all. So, for example, the expected cat-fight between Leslie and Morgan never happens. And Morgan isn’t even portrayed as an all-out bitch, as you might expect. She’s superficial, but basically decent.

Leslie’s dad Lloyd is her staunchest support, though mother Janice (Pam Grier) somewhat reinforces her daughter’s low opinion of herself. To compensate for that, Scott’s mom (Phylicia Rashad), disapproves of Morgan, but takes a shine to the down-to-earth Leslie.

Sanaa Hamri directs the domestic scenes capably, and the court action with some flair. Common is very good in his first starring role, and projects leading man charisma and quiet strength, though it’s not much of a part.

Like the concurrently released PG-rated “Letters to Juliet,” the film is admirably wholesome (not always a virtue in itself). The one love scene between Latifah and Common is as innocuous as a bedroom scene can possible be.

The film espouses decent values like beauty coming from within, nurturing solid family relationships, remembering where you came from, and living by the right values.

A stronger plotline – and more of the sort of humor that occasionally peeps through (e.g. Leslie flooring Scott and his mom by rattling off Scott’s basketball stats from years before) -- would have been welcome.

All in all, the film seems to reflect the nice, easy-going manner of Latifah herself, which is not a bad thing at all, but this should have been much better.

(Rated PG by the MPAA for some suggestive material and brief language.) Print this post
Posted by Harry Forbes at 5:23 AM